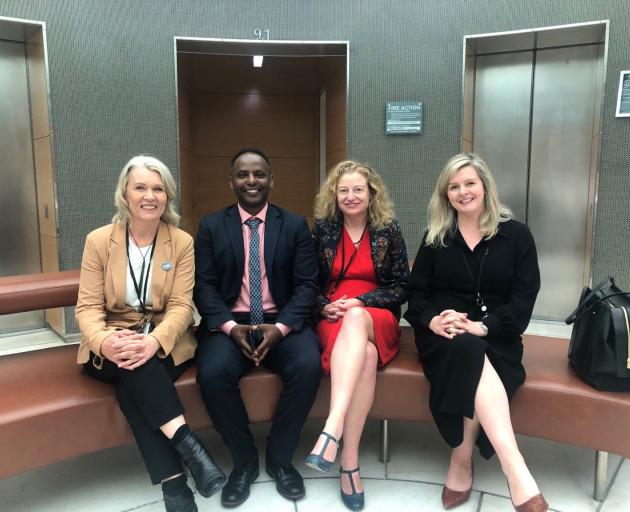 Both major parties had their first caucus meetings at Parliament yesterday after the weekend’s historic election.

For Labour, it was a chance to gather its huge line-up of new and returning MPs for a celebratory introduction to what will soon become a regular fixture on their calendars.

For their National colleagues, it was less of a celebration and more of a wake.

Members of the significantly reduced caucus farewelled outgoing MPs with gifts of silver trays before turning their attention to the future.

National Party leader Judith Collins said later she had the full backing of her caucus and "everyone has moved on" from previous leadership coups.

"I’m feeling positive about our way forward ... Everyone is really focused."

Ousted Ilam MP Gerry Brownlee, who returned to Parliament on National’s list, also confirmed he would be staying on, after speculation he might resign.

Whether he would remain deputy leader was still up in the air.

Long-serving MP Nick Smith, who lost his Nelson seat but returned on the list, would also be staying on.

"We welcomed five new MPs and congratulated them, but we also farewelled a number, which was sad, including a number who weren’t expecting to, who didn’t want to go.

"As you can imagine, that was pretty hard work."

The caucus was now focused on moving forward and he said he fully backed Ms Collins as leader.

"I have complete confidence in her to go forward and be our leader."

"There were a lot of us in a room that has probably never seen so many MPs in it," she said.

They reflected on the election before moving on to other discussions, but she would not be drawn on any specifics.

She told Ms Ardern she was interested in any work concerning protecting seniors, broadcasting, social enterprise and international relations.

With boundary changes adding more rural areas to her electorate, she also asked to become a member of the party’s rural caucus.

Ms Ardern yesterday said she would probably announce ministerial appointments within the next couple of weeks.