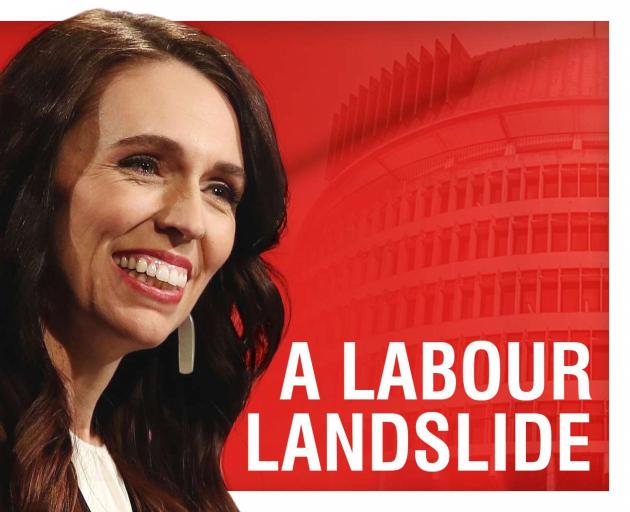 Labour leader Jacinda Ardern has been rewarded by voters with a landslide win — delivering her power in her own right, and an absolute drubbing to the National Party.

Labour has almost 50 per cent of the vote — the most any party has achieved under MMP and easily enough to govern without relying on another party, meaning it will get more than the 61 seats needed for a parliamentary majority.

However, the night was an absolute bloodbath for Judith Collins' National Party — and Labour's former coalition partner NZ First was kicked out of Parliament. It came in well under 30 per cent — a result that would give it about 35 seats. That is 20 fewer than the last election.

Walking out her front gate in Sandringham last night, bound for Labour HQ, the Prime Minister was greeted by raucous cheers as the crowd gathered close in to greet her. Ardern arrived at the Auckland Town Hall to scenes of jubilation and was joined on the stage by her partner Clarke Gayford and fellow Labour MPs.

"Tonight New Zealand has shown the Labour Party its greatest support in at least 50 years," she told supporters.

She acknowledged voters who had switched allegiances from National.

"For those amongst you who may not have supported Labour before... to you I say thank you. We will not take your support for granted."

She said Labour would be a party which works for "every New Zealander". 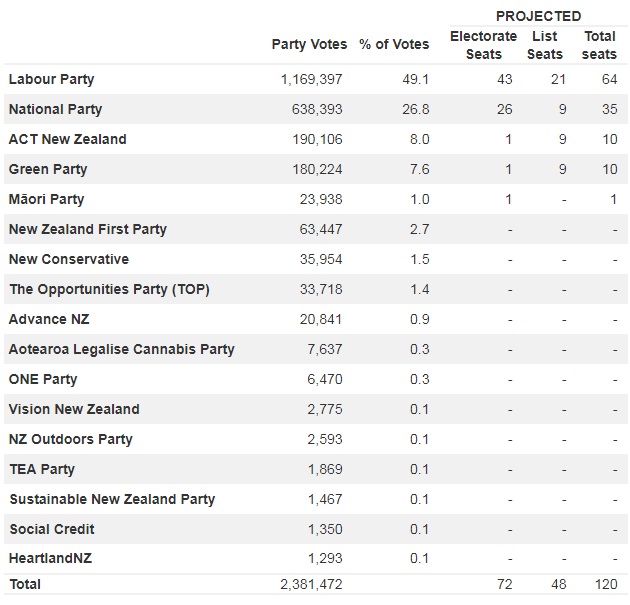 Labour was committed to key infrastructure, 100 per cent renewal electricity, the environment and supporting those at risk.

"Over the next three years there is much work to do. We will build back better from the Covid crisis; better stronger with the answers to the [things] New Zealand already faces." 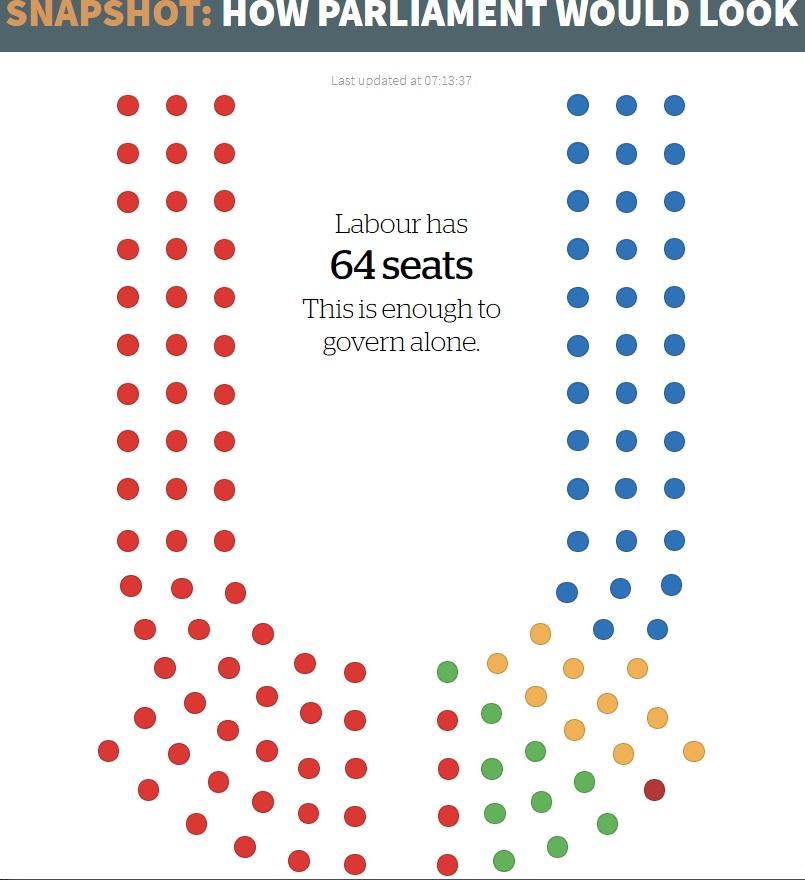 The Green Party is on track to get about 8 per cent of the vote, and MP Chloe Swarbrick is well-placed to win the Auckland Central electorate.

Ardern would not say whether or not she still intended to invite the Green Party to be part of the Government, or what role they might have. She said many voters who had never voted for Labour before had done so to give the party the ability to move quickly to address the issues Covid-19 had left it with.

"They have done that because they want us to crack on with it, they want us to move with haste and speed on the recovery. They don't want too much complexity so I'll be keeping all that in mind in the work we do going forward."

Green co-leader Marama Davidson congratulated Ardern for "an extraordinary win" and said the Greens were hoping to be part of a "strong, truly progressive government".

"As for the next challenge, we'll all have to wait and see."

Act leader David Seymour was set to get about 10 MPs into Parliament.

The Maori Party was in with a chance of getting back into Parliament — the contest between Labour's Tamati Coffey and the Māori Party's Rawiri Waititi was paper-thin.

Ardern was at her Sandringham home as the results rolled in.

Gayford spent the evening on the barbecue and surprised media and residents with fish bites made from his catch on a fishing trip with his father and brother in law. He also made venison patties after killing a deer during a hunting trip.

Former Prime Minister Helen Clark said last night there would be "a huge number of novices" entering Parliament for Labour.

The final count and special votes are unlikely to change Labour's election night result very much: Labour usually picks up a seat on those votes.

Speaking to supporters at National's HQ at the Royal New Zealand Yacht Squadron in central Auckland, Collins said she had phoned Ardern and congratulated her on an excellent result for Labour.

"Just to avoid any doubt, tonight is the start of the next campaign. Bring on 2023," she said as she ended her speech.

National has lost several electorate seats many of which were traditional strongholds.

They included Ilam, the Christchurch seat held by the party's deputy leader Gerry Brownlee since 1996. However. Brownlee would make it back in on the list if he decided to stay on, and Paul Goldsmith also seemed safe.

Brownlee acknowledged it was a bad night for his party, putting it down to Covid-19 rather than Collins' leadership or the campaign he had led.

Other National MPs were less forgiving — Simon Bridges and Mark Mitchell pointed to mistakes in the campaign, but both said Collins did not deserve to cop all the blame.

Collins had to start from a standstill in July after the leadership changes from Simon Bridges to Todd Muller in May, and then to Collins in July after Muller stepped down.

That and a slew of resignations by high-profile MPs such as Paula Bennett, Amy Adams and Nikki Kaye proved too much to come back from.

Ardern had hammered home the message of stability and certainty to voters in an election that was inevitably about who voters trusted most to contend with the Covid-19 environment — and she was rewarded accordingly.

Congratulations to the Labour Team for a well deserved victory after a stunning campaign.
I find Mr Brownlee's comment that the Labour victory was down to Covid19 interesting. Is he saying that somehow a virus caused people to vote Labour, like it was working for the Labour Party. I doubt it somehow because even coming from Mr Brownlee that is just absurd. Or is he saying that the vote is a thank you response from NZer's who have seen the sense and overwhelming acceptance of Labour's management of the pandemic, putting people ahead of greed and their ( the NZ public's) total rejection of National's whining and carping about how they and their donors were losing money, which is what their opposition came down to basically. I think the latter is more realistic but Mr Brownlee should state it honestly and bluntly, not mutter around the edges.

He means, but can't say, Labour's managing of the pandemic.

The virus goes round without Agency, but with replicant urge. It's a tricky Johnnie.