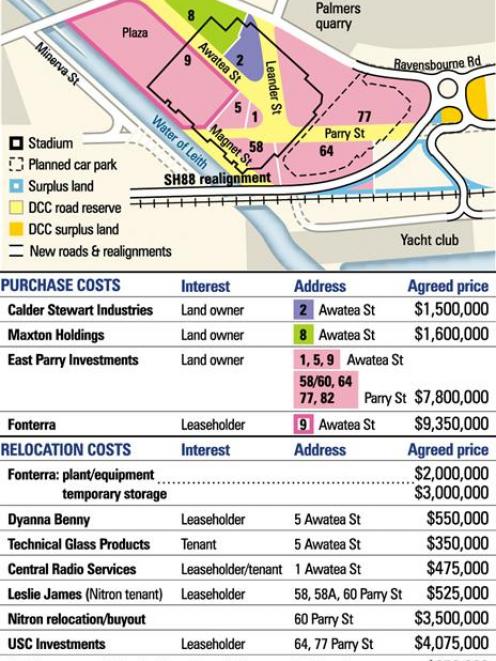 Stadium land deals. ODT graphic.
Dairy giant Fonterra received the lion's share of money paid to buy land for the Forsyth Barr Stadium site in Dunedin, it has been revealed.

Of the $35.6 million gross cost of land bought by the Dunedin City Council for the stadium, the University of Otago and State Highway 88, Fonterra received almost $15 million.

The company owned no land at the site, but owned the lease, buildings and plant at 9 Awatea St.

Figures for the land sales were released following an Otago Daily Times' Local Government Official Information and Meetings Act request, a request that was held up while the council negotiated land sales for the nearby State Highway 88 realignment.

Quotable Value valuations for the land in 2008 totalled $15 million.

The council had a net budget of $20 million.

Dunedin City Council finance and corporate support general manager Athol Stephens said the Carisbrook Stadium Trust, which negotiated the deals, had been in a difficult position.

"We had an anxious buyer, sellers who positioned themselves as disinterested sellers, who knew the timelines.

"What's fair in that situation?"

We had the land rezoning - everyone knew what was happening," Mr Stephens said.

"That's part of the game. Everyone played the game to various degrees."

Council property manager Robert Clark said some "were fairer than others".

Of the Fonterra deal, Mr Stephens said the council had to buy the lease and the buildings, which were operational and in good condition.

A Fonterra spokesman yesterday would only confirm the cost, which he said was for the lease, buildings and equipment, and compensation for increased operational and transition costs.

Trust chairman Malcom Farry said negotiations with Fonterra were "quite lengthy", and the trust had managed to move the company's original price downwards.

Another larger payment was $4 million to USC Investments, directors of which are Keith and Lianna-Merie Hagaman, of Christchurch, and Stuart McLauchlan, of Dunedin.

Mr Farry said that company leased a significant area of land, and owned buildings on the site.

Mr Stephens said the only other option the trust had to buy the land more cheaply was to use the Public Works Act, but the time that would have taken would have meant the stadium was not ready for the Rugby World Cup.

Mr Farry did threaten to use the Act in 2008, and criticised some land owners at the time for not acting in good faith.

Yesterday, Mr Farry said despite what was a difficult negotiating environment, "in hindsight it is quite apparent to us, and anyone with knowledge of the property business, we achieved a fantastic deal".

While the gross price was $35.5 million, when land for the University of Otago, SH88 and surplus to the stadium's requirements were taken out, the actual cost was $25.7 million.

The net cost would have been close to the $20 million budget if the sale of Carisbrook, the future of which the council is considering, had gone ahead, he said.

The trust originally hoped to buy Carisbrook from the Otago Rugby Football Union for a nominal sum, but the council ended up paying $7m.

A return from that purchase might still come, Mr Clark said. He was "totally confident" the $7 million could be recouped if the Carisbrook land was sold.

There was also a small piece of surplus land beside the railway line on Parry St, on industrial land, which the council had yet to decide what to do with.

The land ownership at the stadium site was arranged under the "Glasgow lease" system, which has up to four tiers. One person or company owns the land, and leases it to another party. The lease is in perpetuity unless rent is not paid.

The lessee may have a tenant, and the tenant may build on the land, or that building may be owned by a fourth entity. The perpetual nature of the lease makes it more valuable.