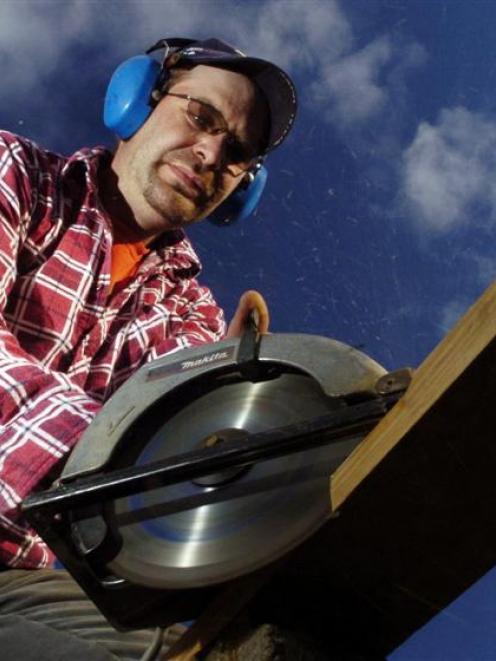 Dunedin builder Dean Benwell jealously guards what hearing he has left, as ACC claims for industrial deafness continue to rise. Photo by Gerard O'Brien.
"Hearing loss is like a car with worn brakes. You only notice it when you climb into someone else's car and their brakes work better."

Dunedin builder-joiner Dean Benwell (34) says his work on building sites with noisy power tools over the past 16 years has damaged his hearing, and now he fears for the younger generations coming through.

He started his career as an apprentice gib stopper when he was 18 and the use of earmuffs was not common on building sites.

"When I first started, the only safety equipment you needed was a pair of good boots.

"It just got to the point where it started to hurt. Working with a [circular saw] became painful."

Mr Benwell said it was important for young people in noisy professions to get into the habit of wearing ear protection.

His hearing loss was "a gradual thing" and he was unsure about how much he had lost.

While he did not think he was profoundly deaf, he believed his hearing loss was noticeable and it caused difficulties in his daily life.

"You don't realise how big an issue it is until you're around people who can hear things that you don't.

"When I'm in a bar, it's muffled. There's too much background noise and you can't hear what people are saying. You tune out of conversations after a while because you can't hear . . ."

Mr Benwell was not surprised at the 658% increase in ACC claims for industrial deafness during the past decade and believed the number would plateau as older workers passed through.

However, he was concerned the older generation might be replaced by a younger generation who also liked to listen to loud music through earphones and ride around in noisy cars.

Now, Mr Benwell is not taking any chances with his hearing.

He always wears earmuffs when working around power tools and offers hearing protection to other tradesmen working with him.