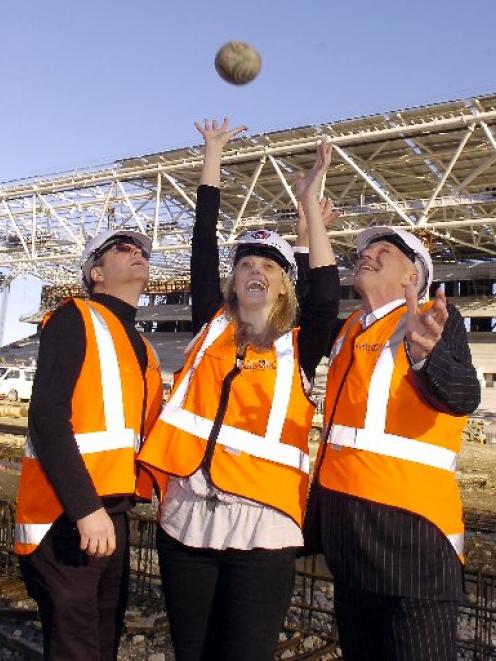 Dunedin Venues Management Ltd directors (from left) Peter Brown, Jennifer Rolfe and Peter Hutchison get a taste of the Forsyth Barr Stadium experience yesterday, as the countdown to completion is set to tick over to 365 days tomorrow. Photo by Jane Dawber.
It might still be a year away from completion, but those building the Forsyth Barr Stadium in Dunedin are already planning 100 years ahead.

Members of the Dunedin Venues Management Ltd board - who together are tasked with overseeing the completed venue's operations - visited the stadium site yesterday to mark an impending milestone.

Tomorrow, the calendar will flip over to 365 days to go, signifying exactly one year until the stadium's expected completion on August 1, 2011.

While an army of contractors, and cement mixers and cranes continue to crawl across the site, DVML has drawn up plans to mark both the countdown and the venue's 100th anniversary with a time capsule.

The capsule would be buried on the walkway leading to the venue's main south stand, marked by a plaque, in the months leading up to next year's completion date, DVML chief executive David Davies said.

Buried inside it would be a treasure trove of 100,000 digital photographs documenting the stadium's construction, stored on a variety of media devices, including solid-state hard drives, Mr Davies' spokeswoman said.

The drives contained no moving parts, so would not degrade over time, and retained memory without power.

The aim was to ensure the images could be recovered in 100 years, despite any battering by the elements or technological advances, she said.

Schematics and instructions on how to use the technology would also be included.

A 13m paper roll of 1500 signatures, drawings and messages collected during last month's public stadium open day would be included.

Mr Davies said members of the public were invited to submit their ideas for possible inclusion in the 40cm diameter, 75cm-deep cylinder, which would be opened on August 1, 2111.

"The time capsule is a way for the community to leave a snapshot of 2010 Dunedin for the next generation.

"It'll be interesting to see what people come up with."

Carisbrook Stadium Trust chairman Malcolm Farry said he was confident, with the right maintenance and upgrades, the stadium would still be operational in 100 years' time.

• Ideas can be submitted to the Forsyth Barr Stadium facebook page, emailed to info@forsythbarrstadium.co.nz or posted to PO Box 5506, Dunedin.