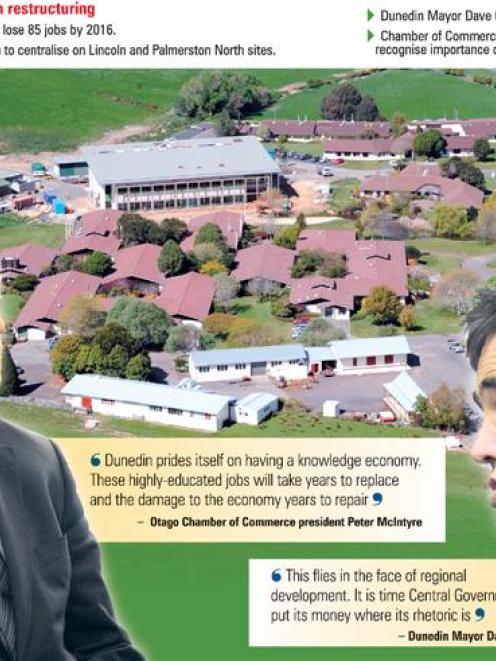 Dunedin Mayor Dave Cull has called the plans by AgResearch to relocate 85 jobs at Invermay, near Mosgiel, to other parts of the country ''appalling''.

A ''damn angry'' Mr Cull said it was time for Central Government to match its rhetoric on regional and economic development with actions.

No roles were required to shift before 2016, but Mr Cull said the reorganisation was another sign from Central Government there was no point coming to Dunedin as people were losing their jobs.

Prime Minister John Key had opened the door, saying New Zealand needed to make use of existing infrastructure in the regions, rather than centralising on larger centres or building new facilities.

''Here, we have a government institution which doesn't care about existing infrastructure and is in fact taking it somewhere else,'' he said.

Dunedin had been hit hard by government entities taking local jobs away.

''This flies in the face of regional development. It is time Central Government put its money where its rhetoric is,'' Mr Cull said.

Minister of Economic Development Steven Joyce last night said his personal view was Dunedin was in a stronger position economically than three or four years ago.

The success of companies like Fisher and Paykel, Scott Technology, and ADInstruments, and others countered the effect of the Invermay job losses.

''It's important the city retains its confidence because actually there's a number of successful businesses in the city, based in the city, that are growing significantly.''

Asked if Dunedin must rely on the private sector as the public sector centralises, he cited the heavy spending on education and health, but said no region could rely on public sector growth.

''Regional development is about economic development. It's not about Government just going in and starting up a whole bunch of jobs and paying for them out of taxpayers' money.''

It would not be right for a politician to start ''second-guessing'' AgResearch, and he was confident the Government-owned Crown Research Institute would have carefully considered the pros and cons.

The city was doing all the right things, and had a strong knowledge economy, he said.

AgResearch chief executive Tom Richardson said two large campuses - one at Grasslands, in Palmerston North, and one at Lincoln - were proposed.

Over the next three or four years, about 280 roles - both science and support functions - were likely to be relocated to Grasslands and Lincoln as facilities became available.

These campuses would form part of much larger agriculture innovation hubs with key sector partners at those locations. Science at Grasslands would focus on food, nutrition, animal health and forage, and Lincoln on farm systems and land use.

Activities at Invermay, which would have about 30 staff, and Ruakura, near Hamilton, which would retain 90 staff, would focus on specific environmental and farm systems. Mr Cull questioned the sense of boosting facilities in Christchurch when the lessons following the earthquakes should have been to spread capacity.

Otago Chamber of Commerce president Peter McIntyre was at a loss to understand what else his organisation could do to convince the Government Dunedin was serious about taking on a role as a knowledge economy.

The chamber regularly met politicians, including Mr Joyce, to talk about what the city could offer.

''This is a significant announcement for New Zealand. The big are getting bigger, the small are getting smaller and regions are being marginalised.

''Dunedin prides itself on having a knowledge economy. These highly-educated jobs will take years to replace and the damage to the economy years to repair. This sends a signal to the rest of New Zealand we have more job losses than job gains.''

While understanding AgResearch was looking at how to become more efficient through the better use of resources and greater output by using hubs, the decision to relocate 85 Invermay jobs was a ''hard knock'' to the rural base of the Otago economy. There was no reason all jobs should be created in just one city in each island, he said. Those decisions, however, were being made outside Dunedin.

Job losses, one after another, made it harder convincing people Dunedin was open for business.

''As a city, we have to operate in clusters and work on a strategy to seize any opportunity for job growth.

''I want us to lay the platform for ease of business. There is no second chance. We must work harder at creating the right impression - we are the easiest city in the country [in which] to set up and operate a business.''