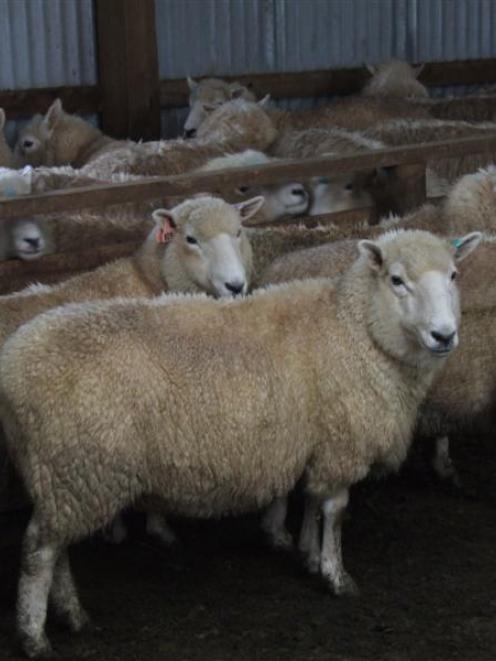 Perendale ewes. Photo by ODT.
Perendale sheep breeders have entered the debate over restructuring at Invermay, suggesting the move of ''world-class research'' to Lincoln be put on hold for two years after the planned shift.

The Perendale Sheep Society of New Zealand's annual conference, which included a visit to the research centre, ended in Dunedin on Sunday night.

While two AgResearch scientists - Drs Michael Lee and Tricia Johnson - addressed the group at the centre, they did not mention the restructuring.

But they were among a group of four senior scientists, who Southern Texel Breeders Association member Hamish Bielski earlier described as ''rock star'' scientists and said they had indicated they did not plan to shift.

Following an update on research projects, West Otago Perendale breeder Allan Richardson spoke briefly of the importance to the red meat sector of the research done at Invermay.

Describing it as the ''hub'' for genetics, he asked those present if they wanted to lose that capability, saying, ''We won't be coming back here next time.''

AgResearch's restructuring plans, which include downsizing Invermay and relocating jobs to Lincoln, were later formally discussed by the society.

Those attending unanimously proposed the move be put on hold for two years after the proposed final move in 2017, so the ''financial, scientific and human resource implications'' of the move could be fully evaluated and communicated.

The society felt that world-class sheep, beef and venison research done by AgResearch scientists at Invermay should not be risked by relocating to Lincoln, especially while the industry continued to lose farmers to other land uses, Mr Richardson said.

''Farmers feel they have not been informed, rather they have just been told what is happening. This decision is far too important to rush through without the full costs and benefits of each option being known,'' he said.

The society believed the debate should not just be for the benefit of red meat sector farmers. It was of ''utmost importance'' to New Zealand's economy, which was still reliant on a strong, high performing agricultural sector, he said.

The Southern Texel Breeders Association has also been vocal in its concerns over the restructuring and passed a vote of no confidence in AgResearch over its handling of plans to slash Invermay jobs.

When contacted, an AgResearch spokesman said the plan to bring scientists working on animal productivity together at the Lincoln hub had not been made lightly.

The Future Footprint proposal was developed with the primary sector, to enable it to deliver on the better science more effectively.

''The financial, scientific and staffing impacts of a number of options, including the status quo, were fully evaluated as we developed our plans. We are confident that all New Zealand farmers will continue to get the science they need to make informed decisions about managing their farms and their livestock, in the interests of receiving higher returns,'' he said.

There was a ''robust and logical and coherent case'' for the programme to go ahead in the time frame outlined.

When it came to consultation, AgResearch had talked to 150 organisations, including farming groups, and more than 300 individuals, he said.

Further opportunities to speak face-to-face to farmers were planned and they were invited to continue to contact AgResearch ''should they have any concerns''.

''We will be confirming our plans in the next couple of months to enable the design phase to commence. If there are changes, we will let our staff know first, and then we will be in contact with our stakeholders,'' he said.