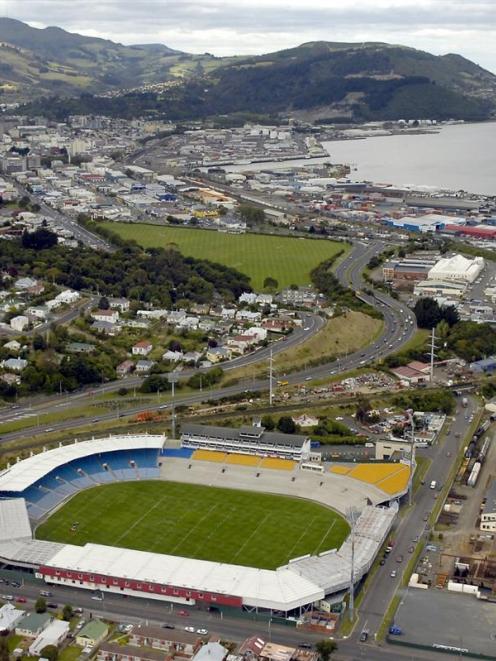 Carisbrook from the air and the car park at right. Photo by Craig Baxter.
The Dunedin City Council has sold another piece of its Carisbrook property collection.

It has an unconditional agreement on half of a 5000sq m section which used to be the stadium members' car park on the corner of Burns St.

DCC property manager Robert Clark would not disclose the sale amount or identify the purchaser.

He was asked to update the council yesterday in respect of Carisbrook, during ongoing annual and long-term plan meetings.

An additional $143,000 was needed for Carisbrook debt servicing and basic maintenance in the 2012-13 financial year.

Initially, the council budgeted for Carisbrook to be sold by July 1, but it was unlikely an agreement would be finalised before Christmas.

Mr Clark said five parties were interested, including a Dunedin investor and a Dunedin family.

An expatriate with a "substantial amount of money" and two Christchurch-based organisations were also involved in negotiations, he said.

"I'm not in a position to say who they are at this stage. In terms of negotiating a sale there are a lot of issues that have to be dealt with, and I'm in discussions with those parties at the moment but they haven't come to any finality," he said.

Mr Clark said even if the property was sold or a transaction entered into within the next two or three months, he doubted an investor would be able to settle by the end of the year.

In response to a question from Cr Richard Thomson, Mr Clark said he was confident the council's Carisbrook debt would be covered by a sale.

"The current debt is about $4.3 million, and we have an unconditional agreement on half of the Burns St property. It's reasonable to expect, looking at that particular deal, we'll reduce the debt," he said.

The land was formerly owned by the Otago Rugby Football Union and, along with the stadium and the car park next door, was sold to the council in 2009 once the Forsyth Barr Stadium became a certainty.

Sale and purchase agreements for Carisbrook obtained by the Otago Daily Times showed Carisbrook was sold to the council for $6 million.