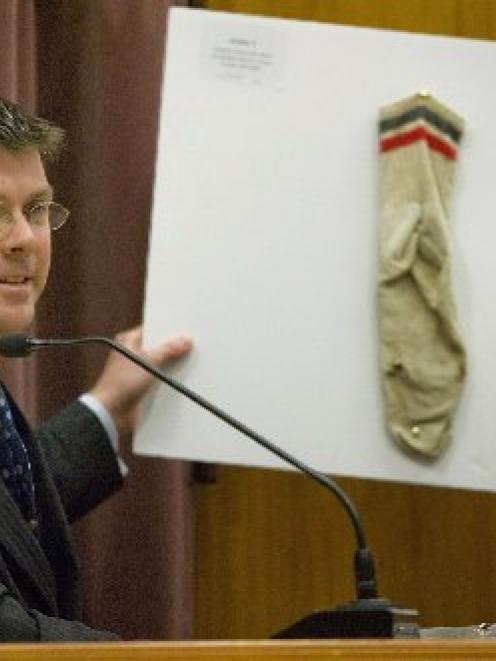 Forensic scientist John Manlove gives evidence in Christchurch yesterday.
An independent specialist in DNA and blood-spatter patterns has told the High Court at Christchurch the direction of blood staining on Robin Bain's trackpants was consistent with Mr Bain shooting himself while standing, with his right foot on a chair.

Dr John Manlove, an Oxfordshire-based forensic scientist who has assisted in the investigation of war crimes in Iraq, was called by the defence on the 50th day of 37-year-old David Cullen Bain's retrial for the murders of his parents, two sisters and younger brother.

The Crown says David Bain was responsible for all five of the June 20, 1994 killings and that he set the scene to "frame" his father, but the defence says Robin Bain shot his wife and children before committing suicide.

Dr Manlove's evidence yesterday was that the pattern of blood staining on the right leg of Mr Bain's trackpants supported the defence contention.

The way blood stains had been deposited on the fabric above and below the right knee suggested Mr Bain's knee was bent, he said.

His opinion was based on the examination of photographs of the various blood stains on Mr Bain's clothing, an adjacent curtain, and nearby areas of the lounge where the 58-year-old school principal's body was found with the rifle alongside.

Shown a newspaper photograph of a demonstration in the courtroom earlier this week, by United Kingdom ballistics expert Philip Boyce leaning over a rifle, with his right foot on a chair, Dr Manlove told Justice Graham Panckhurst and the jury Mr Bain could have been standing in a similar position when he was shot.

The pattern of blood staining on the trackpants was consistent with that.

If the blood stains originated at the same time, the bent knee could explain why the blood was travelling in different directions.

With the knee bent, the blood would hit at different angles, making it appear there were two sources of blood when the blood was actually from one source.

But under cross-examination by Crown prosecutor Cameron Mander, who showed him a diagram of a person sitting on the floor, knees bent, and the head above the knees, Dr Manlove agreed that "as a general proposition" the blood staining travelling upwards above the knee and downwards below the knee, could also be consistent with a wound being inflicted to the head in that position.

A Crown witness earlier said she had seen Mr Bain seated in a beanbag in the front room while meditating.

His knees were bent and his head was leaning forward over his knees.

In relation to blood stains on a curtain across the computer alcove, next to where Mr Bain's body was lying, Dr Manlove said the spots were "fairly large".

They appeared to have been projected on to the curtain by the pressure of blood pumping.

Given their size, he believed they had travelled through the air and struck the curtain on a downward arc, so the wound could have been inflicted above the highest point of staining to the curtain.

It was very difficult to be exact about Robin's position when the blood was deposited, the witness said.

He could not say whether Mr Bain was kneeling or standing, nor precisely what distance Mr Bain would have been from the curtain.

Dr Manlove told the court he tested Mr Bain's shoes and found three distinct blood spots on the top of one of them.

The spots appeared to have dropped on to the shoe from the air, and contained Mr Bain's DNA.

If the blood was deposited when Mr Bain was shot, that meant he could not have been kneeling as the Crown earlier contended, Dr Manlove said.

A Crown forensic witness who said he found no blood on the shoes told the court three weeks ago he was not surprised about Mr Bain's DNA being identified in the stains because of the sensitivity of today's testing methods.

But he suggested the DNA could have come from cells deposited in the process of the shoes being used over time.

In answer to a question from the jury yesterday, Dr Manlove said that, as a forensic scientist, he could not say when blood spots were deposited on the shoe.

Dr Manlove said he believed a shot to Laniet Bain's left cheek was not the first of the three wounds she sustained, although Crown pathologists had concluded it was.

Laniet had three bullet wounds: one to the cheek, which all the pathologists in the case say was survivable, and two fatal wounds, one to the top of the head and one above the left ear.

Evidence that the cheek shot was first was, in his view, mistaken, Dr Manlove said.

The position and shape of blood spots on the mirror surface at the foot of Laniet's bed led him to believe she was sitting up when the particular wound was inflicted, and the blood had spurted from the wound.

The spots could not have occurred if Laniet had been shot while lying in the position in which her body was found.

If she had moved after being shot in the cheek, there would have been smearing around the cheek wound.

Dr Manlove also disagreed that some spots of Stephen Bain's blood found on David Bain's socks had dropped from above.

He said his conclusion from his tests was the staining was more consistent with Bain having walked in wet blood.