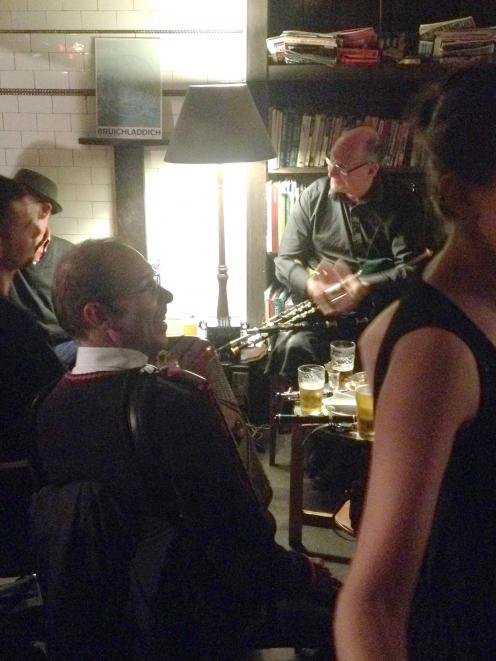 Balkan Sounds singer Anastasia Tasic, of Belgrade, walks back to her drink after finishing the Serbian song Mito Bekriso with musicians including the Erin Street Group and accordionist Jugoslav Hadzic at Albar on Tuesday night. Photo by Shawn McAvinue
The moment Belgian singer Micheline Van Hautem walked from the back of Glenroy Auditorium singing, she owned the room.

''Surprise,'' she said between verses.

After the first song, she told the audience how it was too rough to go on a boat trip to see albatrosses, so she stayed in town and bought her husband a possum sweater.

Van Hautem then told the crowd the lyrics of the next song were about a couple who had been together for so long they could communicate with a glance.

To be fair, Van Hautem could have sung anything - the court pages or the telephone book - and it would sound beautiful.

The performance was hard to leave, but I needed to dash across the Octagon to the Regent to catch the end of Maori contemporary dance group Kaha.

In the foyer, audience member and Dunedin dancer Tama Braithwaite-Westoby said the production had a good mix of dance styles and had inspired him to incorporate poi into a future routine.

A mad dash back to the Glenroy Auditorium to catch the end of Van Hautem and the audience were still mesmerised.

Anna Smith, of Dunedin, described the performance as ''absolutely fabulous''.

''What she put into her performance was just amazing. She gave us everything.''

You can't ask for more than that.

Walking back to work, I spotted Balkan Sounds singer Anastasia Tasic, of Belgrade, standing in Albar performing an impromptu song - about a Serbian scoundrel - among a circle of the bar's regular musicians, including the Erin Street Group.

In the circle was Balkan Sounds accordionist Jugoslav Hadzic.

The music and amber ale flowed.

The Serbian musicians were in the festival production Sisters in Arms and after the Dunedin premiere on Friday, Tasic was unwinding with a beer in the Stuart St bar when she had an asthma attack.

She went back to her hotel for her inhaler and when she returned to the bar, she found Hadzic had finished her beer.

Tasic said beer in Dunedin cost seven times as much as in Belgrade, but tasted much better (but not seven times better).

Although the festival run of Sisters in Arms finished on Monday, the Serbian cast planned to stay in Dunedin for a few days.

Hadzic said they planned to visit as many Dunedin beaches as possible, because it was a simple pleasure not possible in their landlocked country.