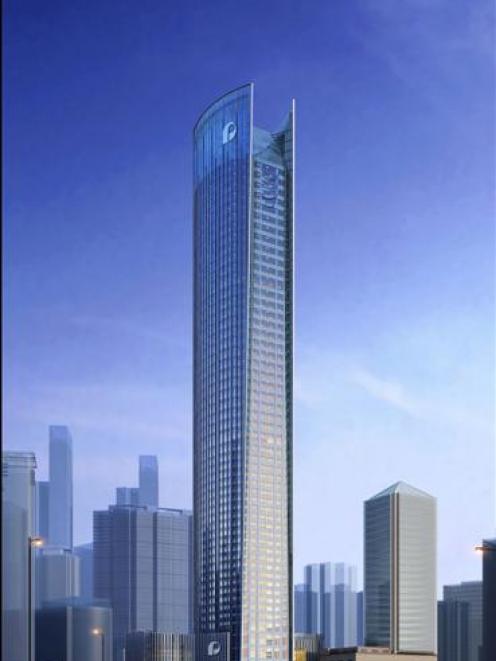 The Shangri-la Hotel in Chongqing, China, is being built by Diamond Heights Construction Engineering, the company owned by Ping Cao who, together with wife Jing Song, is proposing to build the 28-storey waterfront hotel in Dunedin. Photo supplied.
The construction company linked to Dunedin's proposed $100 million waterfront hotel is building the tallest tower in western China.

The building will be the tallest for the time being, at least.

It has been confirmed the company linked to Dunedin's proposed hotel is Diamond Heights Construction Engineering Co Ltd, which is based in Chongqing, China, and employs more than 1000 staff.

The company is owned by Ping Cao, who together with wife Jing Song, of Queenstown, wants to build Dunedin's five-star hotel on industrial land at 41 Wharf St.

Mr Cao's company is responsible for the construction of the 65-storey Shangri-la Hotel in Chongqing, which at 290m high will, when completed, be nearly three times the height of Dunedin's proposed hotel.

It was almost finished, with only the exterior cladding to be added, and was an impressive sight when visited by Betterways Advisory Ltd director Steve Rodgers last year, he told the Otago Daily Times.

It would remain the tallest tower in western China until topped by others already under construction but not yet higher or completed, Mr Rodgers said.

The company was also involved in other projects in China, including two sprawling mixed-use developments comprising hotels, other commercial buildings and housing.

While it was said Diamond Heights would not be directly involved in construction of Dunedin's hotel - should consent to proceed be granted - Mr Cao and Ms Song planned to fund it together and contract a New Zealand company to build it.

The project was being advanced on their behalf by Betterways, of which Ms Song was also a director.

Mr Rodgers said, despite not being directly involved, Diamond Heights would likely supply parts, and its track record was nevertheless impressive.

''I think their projects to date have been excellent. They are high-quality buildings that are really well finished.

''I have no doubt [Dunedin's] building will be a high-quality building that the city will be proud of,'' he said.