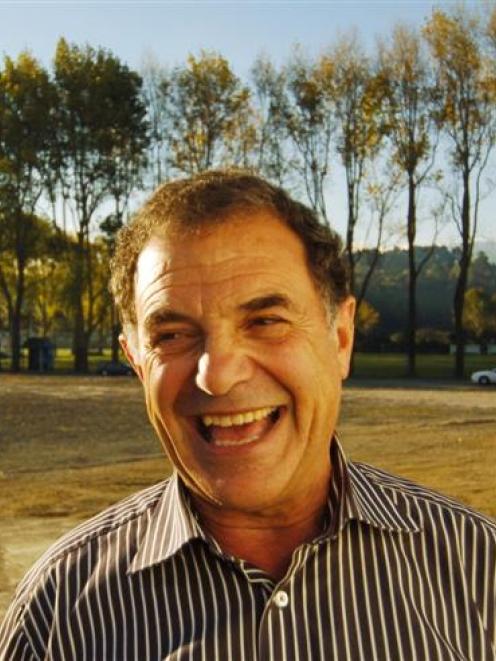 Carisbrook Stadium Trust chairman Malcolm Farry is all smiles at the Awatea St stadium site following yesterday's High Court ruling in Christchurch, which dismissed Stop the Stadium's injunction application. Photo by Gerard O'Brien.
Workers will move on to the Awatea St, Dunedin, site within weeks to begin construction of the $198 million stadium, after a High Court judge yesterday dismissed Stop the Stadium's last-minute attempt to derail the project.

The dismissal was greeted with glee by Carisbrook Stadium Trust chairman Malcolm Farry, who told the Otago Daily Times he was feeling "unusually good" after news of the court's ruling was relayed to him in Dunedin.

He also revealed planning was already under way for a major international concert - with an as-yet unconfirmed performer, expected to attract a crowd from around New Zealand - to open the venue in 2011.

Four councillors who staunchly opposed the stadium project - Fliss Butcher, Dave Cull, Teresa Stevenson and Kate Wilson - yesterday pledged their support to making the stadium work, and called on opponents to do the same.

The developments came after Justice Lester Chisholm threw out Stop the Stadium's application for an injunction, saying the group's application had "failed to get past first base".

The ruling followed Stop the Stadium counsel Len Andersen's attempt on Thursday to convince the court there were further direct and indirect costs to the council from changes in the financial structure of the project.

Dunedin Mayor Peter Chin and city council chief executive Jim Harland were in court for yesterday's decision, as were Stop the Stadium president Bev Butler and her husband, Peter Attwooll.

Speaking after the hearing, Ms Butler said she was "obviously very disappointed". She would seek further advice from her legal team, but intended to fight on against the stadium.

Yesterday's developments meant Mr Chin will sign a construction contract with representatives from Hawkins Construction at a ceremony expected to be held in Dunedin on Monday or Tuesday next week.

Hawkins South Island regional manager Quin Henderson, of Christchurch, told the ODT the company's representatives would then be signing sub-contract deals with Dunedin companies, beginning immediately after the signing ceremony and continuing for several weeks.

At the peak of construction activity, expected in March next year, about 700 people, at least two-thirds of them from Dunedin, would be working in roles associated with the stadium's construction, both on and off-site, he said.

The intention was to sub-contract the carpentry, concrete and finishing work, as well as catering and other services, to Dunedin firms, while structural steelwork - a more specialised field - would probably involve a combination of national and Dunedin companies, he said.

Construction would begin in early May, with establishment and clearing work at the Awatea St site, which was expected to take about six weeks, followed by eight weeks of piling work, expected to begin in mid-June, he said.

Concrete work for the stadium's south stand would begin halfway through piling work, and the aim was to have all the stadium's stands completed by March 2010.

Work on the stadium's roof would then begin, taking about a year, and was due for completion in July 2011, he said.

The venue was expected to be commissioned and tested in August, in time for the 2011 Rugby World Cup beginning in September, he said.

It was a tight and challenging timeframe, but "not insurmountable", Mr Henderson said.

Many of the core crew for the stadium project would be drawn from those who were involved in construction of the $218 million Otago Corrections Facility at Milburn.