350 jobs to go as Cadbury closes

Cadbury staff were called to a meeting to be told about the factory closure this morning. Photo Stephen Jaquiery

After years of speculation and concern, the Cadbury factory in Dunedin will finally close next year, leaving about 350 people facing an uncertain future.

Staff were told of the closure at a meeting on site at 10am. 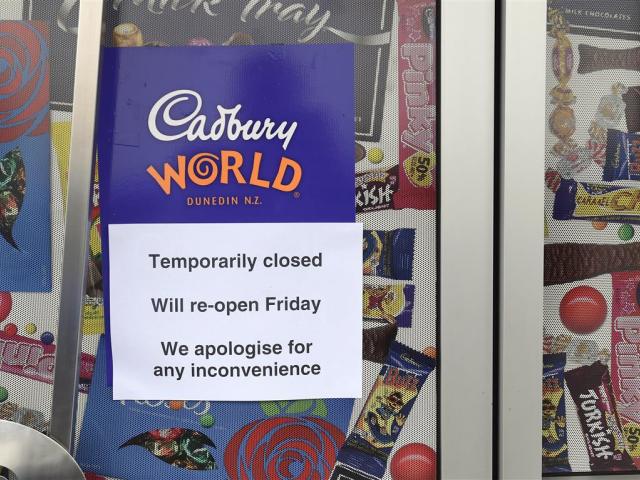 The popular tourism attraction Cadbury World is closed today but will reopen tomorrow.
Mondelez International, the owner of Cadbury, confirmed the closure this morning telling its staff 200 people would be made redundant by the end of the year.

About 100 people would remain with the business until early next year when the factory would close.

More than 70% of the products manufactured at the site were exported, the vast majority being shipped to customers in Australia.

While the business had absorbed the additional costs associated with Dunedin production for several years, there was existing capacity at Australian sites which could deliver production volumes at the same quality as consumers expected. area vice-president for Australia, New Zealand and Japan Amanda Banfield said in a statement.

''This is an incredibly difficult announcement, given the factory's proud history and the outstanding performance of our employees.

''Our people in Dunedin are among the best performing teams in the region and, if it weren't for their dedication and outstanding performance, the factory might have closed some time ago.''

Workplace Relations and Safety Minister Michael Woodhouse, a list MP based in Dunedin, said it was disappointing that despite considering a range of options, Mondelez's view was it was unable to find a way to keep manufacturing operations in Dunedin.

''My thoughts go out to the more than 300 staff who may be affected. Today's news will be a big shock to them, many of whom have worked at the factory for most of their working life.''

Mr Woodhouse called for the city to rally together to help minimise the potential impact it would have on staff and the city as a whole, by helping to provide possible retaining and redeployment options.

My heart goes out to the 362 people & their families at Cadburys Dunedin just told the company intends to close its manufacturing operation— David Clark (@DavidClarkNZ) February 15, 2017

Dunedin South MP Clare Curran and Dunedin North MP David Clark said in a joint statement the loss of 362 jobs was shattering for the people working there and for the city.

``I have visited the factory many times and appreciated the warm welcome, kind hospitality, and good cheer of the staff,'' Dr Clark said.

``These people have been proud to work at this iconic Dunedin institution, and proud to supply products for export with a global recognition. My heart goes out to them.''

Ms Curran said the workers had expenses to meet and families to feed and it would take time for the news to sink in.

''Employment changes affect mortgages and schooling choices. It is too soon to grasp the flow on effects, but we can be certain this will have a huge impact across Dunedin.''

In the year the manufacturing plant continued to run, it was imperative that central government, civic leaders and the business itself works to ensure all of these workers had the training opportunities they need to find alternative employment, the MPs said.

Security guards have been posted outside the popular tourism attraction Cadbury World, which is closed today but will reopen tomorrow.

Disappointed tourists have been approaching the door of Cadbury World and walking away.

It is understood factory night-shift staff were sent home early and among those asked to attend this morning's meeting.

Staff spoken to outside the plant this morning were reluctant to comment, saying they knew little about what was coming.

One woman entered the building beating her hand over her heart, while a man said it was only the second time in 20 years all shifts had been called to the same meeting.

"Things haven't been going well for a while," he said.

Another worker said they had been told not to answer questions from the media.

I don't believe that it is cheaper to manufacture in Australia than New Zealand. What evidence is there of this? The Australian factory is in Tasmania they still have to ship the products by sea to Mainland Australia. They just didn't want to close the Australian factory because Aussie consumers would have boycotted them.

(And they can sell the central Dunedin site for millions)

They could rebuild Dunedin hospital on the site