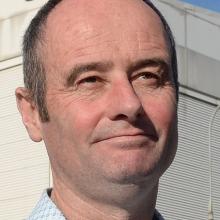 Jim O’Malley.
More than $3 million has so far been pledged  for the Cadbury capital-raising drive, the response delighting its founder.

Cadbury pledge drive founder Jim O’Malley said he was surprised by the enthusiasm that greeted the bid. Many pledges were coming from Auckland, reflecting high national interest, and there were pledges from overseas.

"I’m very excited at this point. I think we’ve touched on something here that people want to be involved in. There’s a very high representation in Auckland."

"People on the street now are saying ‘great idea’ when they pass me."

Dr O’Malley said he was confident the momentum could be sustained throughout the two-week pledge drive.

"When we get to a decent figure, we will see [more] people jumping in."

The biggest pledge so far was $50,000. Dr O’Malley, who is a Dunedin city councillor, said he was getting "generally good support" from fellow councillors, including Rachel Elder, Marie Laufiso, Conrad Stedman and Lee Vandervis. If the pledge drive raises between $5 million and $10 million, Dr O’Malley will launch a formal equity float for the $20 million needed to acquire part of the Cadbury factory.

It depends on Mondelez choosing his proposition from four expressions of interest it is considering for the manufacture of Cadbury Kiwi products. None of the other bidders has gone public with its plans.

Dr O’Malley wants to use the third party manufacturing contract as a stepping stone to wider production on the site. A statement from Mondelez spokesman Jake Hatton confirmed Dr O’Malley’s was the only Dunedin-based proposition.  Mondelez is giving little away about its attitude to the Cadbury pledge drive.

"While we take the time to assess the responses we have received from interested parties, including Mr O’Malley’s community-based initiative, it’s not appropriate for us to comment on the specific detail of these responses," Mr Hatton said.

The confectionery equipment could be made available to "any of the interested parties".

When contacted, Brian Gaynor, head of investments at Milford, in Auckland, cautioned that Dr O’Malley faced a "marathon, not a 10m walk."

"They’ve had a good start and that’s why you’re writing it up, and I’ve read about it [in the media]. It’s very important that you get momentum in the first few days."

But he said pledges were not a commitment, and some people were likely to drop out when it came to paying for shares.

He believed the project needed a few big-name investors to lend the project their reputation and track record.