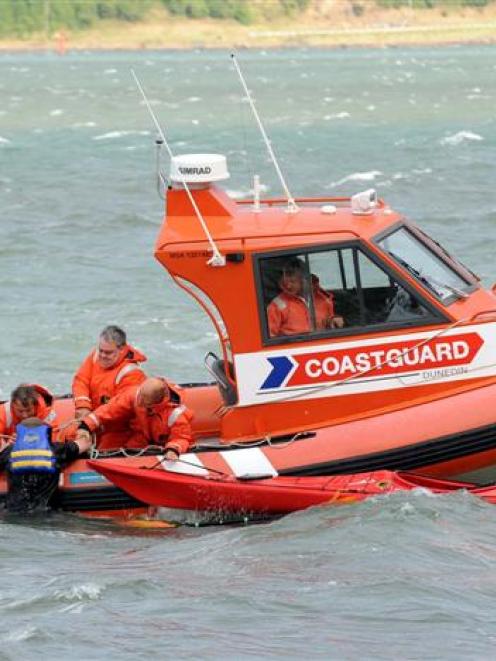 A 62-year-old Dunedin man is pulled from Otago Harbour after his kayak capsized near Company Bay yesterday morning. Photo by Stephen Jaquiery.
Boat-users have been warned to pay more attention to the weather, following three "potentially serious" callouts for the Dunedin Marine Search and Rescue team in 24 hours over the weekend.

The most serious incident occurred yesterday morning, when a water rescue was launched after a kayak capsized in high winds on Otago Harbour.

Residents contacted emergency services after spotting the 62-year-old Dunedin man clinging to his kayak 500m off Company Bay, just before 8.30am.

The man, who was showing signs of hypothermia, was rescued after the Dunedin Coastguard, Marine SAR and Otago Regional Rescue Helicopter were called to assist, Senior Sergeant Craig Brown, of Dunedin, said.

However, Dunedin Marine SAR chairman Martin Balch said the rescue came at the same time a group of people in at least four rowing skiffs were reported by members of the public to be in trouble in high winds at Dowling Bay.

Marine SAR members went straight from the first callout to the second, but arrived to find the rowers safely ashore, he said.

The skiffs were later recovered.

In a third incident, the owner of a catamaran had to recover his vessel from the shoreline near French St, in the Dunedin Harbour basin, after capsizing in "fairly stroppy" conditions about midday on Saturday, Mr Balch said.

In all cases, given weather forecasts at the time, the boat-users should not have been in the water, he said.

"All [the callouts] were related to people going out in conditions that were too much for them or not taking account of the weather forecasts.

"[Yesterday's] weather was well forecast and it was quite obvious it was coming . . . she hit exactly as forecast," he said.

He urged boat owners to pay closer attention to weather forecasts, and take heed, particularly when fronts were forecast to come through.

Mr Balch's comments came as police urged the public to think "safety and skills" over water toys, after a spate of drownings so far this summer.

"Boating, kayaking, swimming, diving and other water-related activities are part of the New Zealand lifestyle but it's imperative that people respect the water, and be more safety aware before they hit the sea, lakes or rivers," Senior Sergeant Bruce Adams, head of the Police National Dive Squad, said.

The squad had recovered the bodies of nine drowning victims since August.

Many were found to not have been wearing lifejackets.

"Unfamiliarity with equipment, mixed with limited knowledge of water-safety skills, a lack of planning and not choosing the right gear for the job is a recipe for disaster," Mr Adams said.

"Even the best skilled and prepared diver, boatie, or kayaker can be caught out by unexpected breakages or changes in sea conditions."

Snr Sgt Brown said, in the case of yesterday's rescue of the Dunedin kayaker, it appeared the wind had picked up "quite quickly" on the harbour.

The strong wind pushed the kayaker, who was wearing a lifejacket, to a sandbar, where he was rescued after spending half an hour in the water.

Coastguard Dunedin president Lox Kellas, of the Portobello police, said the man was wrapped in a survival blanket, as he was showing signs of hypothermia, and taken to Broad Bay, where he was kept warm until an ambulance arrived.

The man was taken to Dunedin Hospital and later discharged.

Senior Constable Kellas said at the time of the rescue the air temperature was 7degC and the water temperature just 13degC, which posed a significant danger to those not "fully equipped" for the cold.