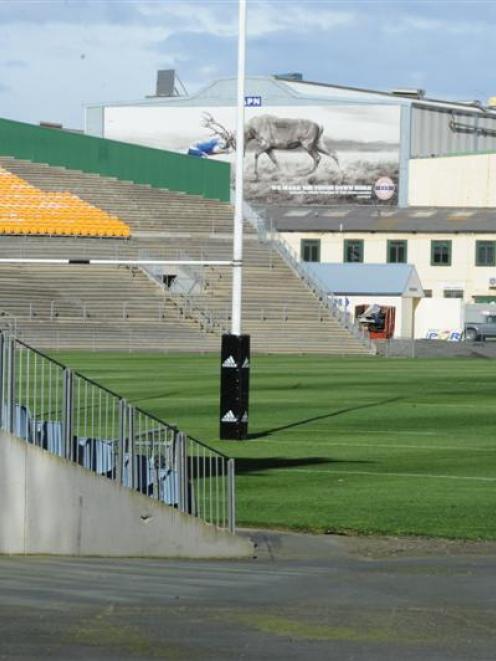 Carisbrook already to All Black training on Tuesday. Photo by Craig Baxter.
Dunedin's supposedly mothballed Carisbrook stadium has been spruced up and the grounds are looking fit to host an All Blacks test match.

The turf at the stadium, which is for sale, is immaculately groomed, a full rugby field is marked out, and a set of full-size white rugby posts is in place, with All Blacks pads wrapped around them.

All the effort is for the All Blacks, who are to train there before their test match against the Springboks at Forsyth Barr Stadium on Saturday.

A spokesman for the Dunedin City Council, which bought the ground from the Otago Rugby Football Union in 2009 for $6 million, said yesterday the council had done nothing special to prepare the ground for the training.

Council contractors had been regularly maintaining the grass since the council bought the ground and while it was trying to sell it.

That included mowing and weeding and some fertilising of the grass.

Perhaps a bit of "spring growth" was the reason it was looking so good at the moment, he said.

No extra money had been spent on the grass for the training.

University Oval, an alternative ground option, was unavailable at this time of year as the goal posts and markings were removed for cricket from September.

He said the All Blacks had asked to train at Carisbrook, and had had the field marked out themselves.