Celebrations put on hold at NEV 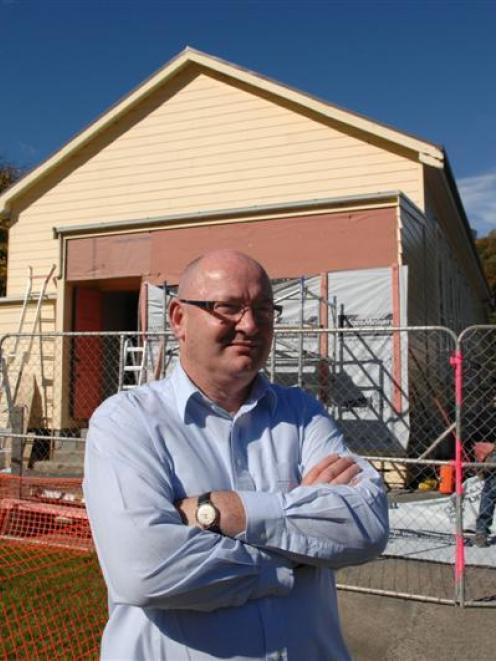 Builders continue to work as fast as they can under the watchful eye of North East Valley Normal School principal John McKenzie, after the school's 160th anniversary celebration was postponed because redevelopment work was not completed. Photo by Linda Robertson.
Construction delays have forced North East Valley Normal School to postpone its 160th anniversary celebrations this week.

But school principal John McKenzie is not too upset.

"We're disappointed we've had to postpone it.

"What does another couple of months matter?"

Mr McKenzie said the anniversary was supposed to be celebrated yesterday to coincide with the previous reopening of the school hall on April 10, 1977, when it was last refurbished using funds from the 125th anniversary committee.

However, the refurbishments taking place were not complete, and the board of trustees did not want to celebrate the milestone until they were.

"There's been no hiccups.

"It's just that building work always seems to take longer than originally planned."

Mr McKenzie said the $750,000 programme of redevelopment and refurbishment work began in 2008.

The school hall and many of the classrooms were strengthened against seismic activity and refurbished inside and out.

"The beautification of the front of the school hall is the only project left to do.

"The hall is going to have a re-gabled porch and entranceway put on it.

"It should all be complete by the end of May."

Mr McKenzie hoped a new anniversary date could be set for November, when the weather would be good enough to hold a picnic, and pupils could dress in 1850s period costume.

It was also hoped the hall would be officially reopened by Richard Walls, who performed the honours in 1977, when he was the MP for Dunedin North.