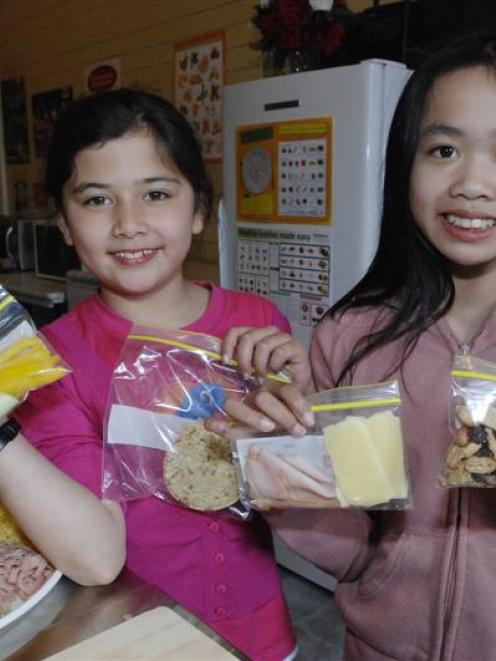 Forbury School pupils Charlene Phuong (left) and Lily Young (both 10) in the school's new kitchen, where pupils can make their own lunches. Photo by Linda Robertson.
Pupils at Forbury School in Dunedin now have an incentive to get to school early, and it is a healthy option.

A new kitchen has been installed at the school, and from this week pupils can make their own lunches from a different set menu each day.

Principal Janice Tofia said pupils would soon see it as more than just a place to make their lunches.

"It's a place that will give them the freedom and independence to look after their own nutritional needs. It allows them to take more responsibility."

The pupils would be supervised by an adult, and there was no limit to the list of healthy options, Mrs Tofia said.

"They can make anything - the only rule is it has to be healthy."

The school would provide all the ingredients and charge pupils $2 each to make their own culinary delights before school starts in the morning.

Mrs Tofia said the idea was to cover costs of ingredients rather than make a profit.

"We're amazed it's turned out so well. I wouldn't be surprised if other schools started doing this very soon."

Mrs Tofia said the school built the kitchen in a storage area at the back of the school hall after receiving $62000 from the Otago District Health Board's healthy eating and healthy action fund.

Many of the pupils had been buying lunch, and staff wanted to see more of them take a healthier option.