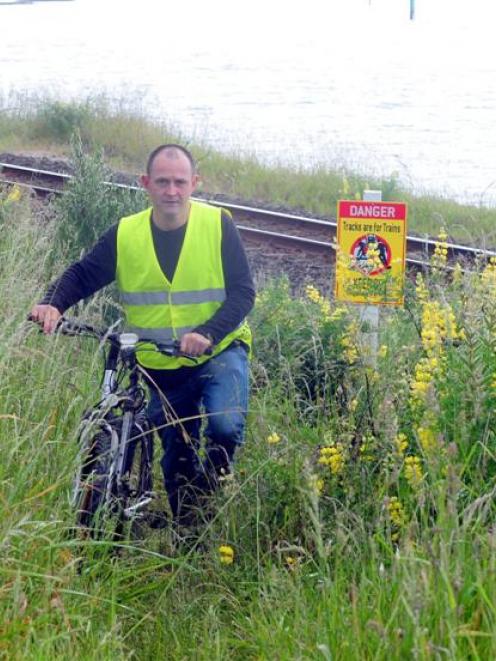 Harbourside Cycle Network co-ordinator Steve Walker waits for the establishment of a cycle-walkway between Maia and Port Chalmers to be completed. Photo by Craig Baxter.
Dunedin cyclists are growing increasingly impatient at the length of time it is taking to establish the cycle-walkway between Maia and Port Chalmers, and some believe the Government may be back-pedalling on the project.

Harbourside Cycle Network co-ordinator and Chalmers Community Board deputy chairman Steve Walker said $5 million was set aside by the last Labour government under the 2009-12 Regional Land Transport Programme, to extend the cycle-walkway which at present runs from Dunedin to Maia.

However, when the new government was elected, the emphasis appeared to change from creating cycleways to developing state highway roading.

Mr Walker said members of the Harbourside Cycle Network were now expressing concern that the funding set aside for the project may be clawed back by the Government.

The agency was about to begin an investigation stage, subject to an internal funding application, he said.

"This stage includes consents for reclamation and negotiations with at least one landowner.

"The construction stage will follow and it, too, will be subject to a funding application."

But Mr Walker said the project seemed to have stalled.

"We've been hearing about consents and investigations for a couple of years now, and we're worried this will never happen.

Mr Richards said the agency had many projects, both nationally and regionally, which were at different stages.

"This means we need to balance value for money for all projects, with local priorities of local projects. We are guided by the Regional Transport Committee. One suggestion is to consider accelerating the construction of the next section of the project once KiwiRail has completed its new bridges.

"While it is likely the construction will extend beyond the three years, I would expect the first stage of construction to be easily achieved once the bridge abutments are completed by KiwiRail."

The project was still expected to cost in the region of $6 million, he said.

Dunedin city councillor Andrew Noone said the cycle-walkway was still a very high priority for the Dunedin City Council, and councillors would continue to work with NZTA, which was the major funder and driver of the project.

Cr Noone confirmed the Government had changed its emphasis from establishing cycle-walkways to developing arterial routes, and the wider community needed to be aware of the situation.

"At the end of the day, there's no doubt the project is going ahead. We just need to get all the ducks in a row and be a little patient.

"We would all like it to be achieved sooner rather than later," he said.