A concern about a lack of slipperiness on a Dunedin slide sparked people to share their solutions to ensure a smooth ride. 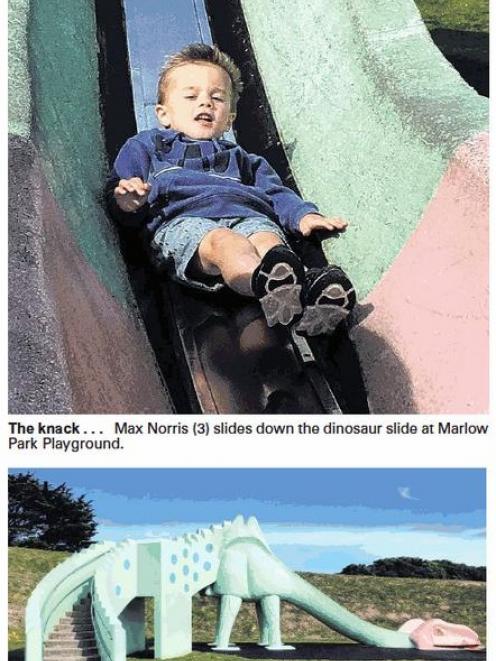 Mosgiel-Taieri Community Board member Martin Dillon raised his concern about a lack of slipperiness on the dinosaur slide at Marlow Park Playground in St Kilda at a board meeting last month.

Dunedin City Council parks and recreation acting group manager Robert West told The Star the council would investigate the concern during the next safety audit of the playground.

Readers contacted The Star to give solutions to successfully slide down the play equipment.

Ann Bell, of Dunedin, called The Star and said her "trick'' was to wrap a polar fleece jersey around the "puku'' of her son Tai to ensure he could "shoot down the slide really fast''.

University of Otago finance Prof Timothy Crack, of Dunedin, emailed The Star and said when he was a boy, "almost 50 years ago'', he would sit on a large piece of waxed paper, which had been used to wrap bread, to gain speed on the slide.

"All the kids did it. The paper waxed the slide and made it much more slippery and it made for a very fast ride.''

The story on the slide generated hundreds of comments on social media, including solutions.

Cherise Finnie said: "We take a microfibre cloth to sit on. You practically gain air speed in the process.''

Andrew McLellan said: "We use to split open an empty milkshake container and sit on it, which would transfer the wax to the metal so the next several people got a really slick run.''

The people posting on social media were divided on the slipperiness of the slide.

Pam Prentice said: "Our three grandsons love the dinosaur slide and have no problems sliding down it, as did their mothers ... a great park.''