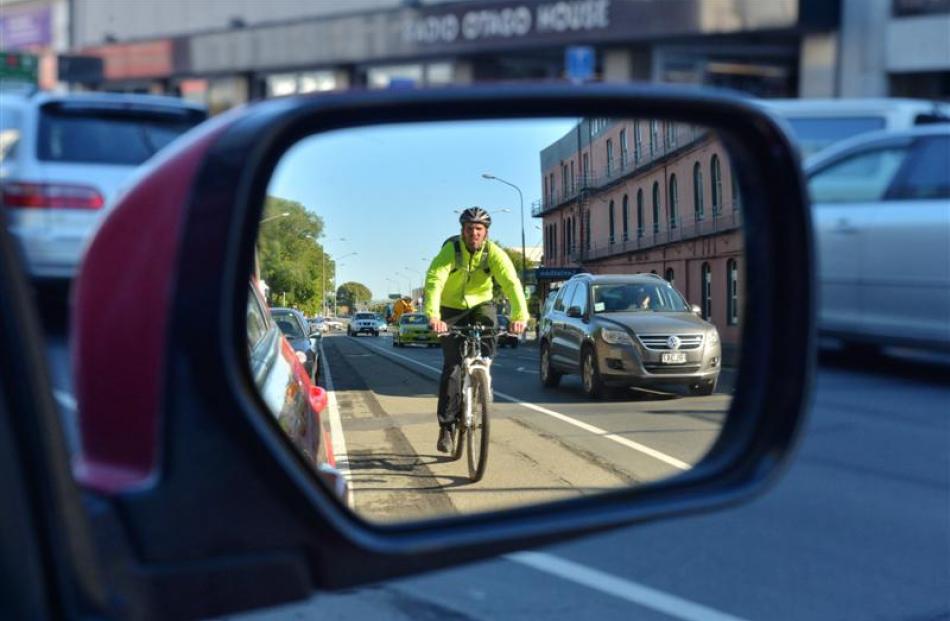 Councillors considering their next step in the joint project between the New Zealand Transport Agency and the council yesterday agreed business cases should be developed for various options for a separated cycle lane through the central city.

They also agreed the council would continue parallel work to develop a mitigation plan for any impact the lanes might have, including on parking. Consultation revealed parking issues seriously concerned some in the community.

The council's infrastructure services committee passed the resolutions after NZTA projects team manager Simon Underwood asked it to decide - while the business cases were being worked through - what the ''bigger picture'' priorities were.

''Do you want the best option for cycling, or do you want a compromise that retains some more parking?''

The working group that developed options for the separated cycle lane design has said it prefers, given the original catalyst of the project was to improve cyclist safety, an option of two one-way lanes on the SH1 pair (known as option 1), which would result in the loss of 391 parks.

The other option under consideration involves a single two-way lane along the route, affecting about 180 parks.

A modified option, known as option 1a, that acknowledges community and business concerns about parking losses, has more recently been added to the mix.

It would maintain 198 car parks along some blocks by placing the cycle lane between car parking and the footpath, achieved by reducing the widths of footpaths, cycle and parking lanes in some places.

Several councillors indicated their possible opposition to option 1a, although decisions on options will not be made until the business cases and mitigation plan are done.

The lanes would be paid for by the NZTA, with the council responsible only for parking and maintenance.

Cr Jinty MacTavish said she had grave safety and best-practice concerns about option 1a, as well as about spending money to provide parking capacity that might not be needed.

Cr Richard Thomson, a retailer himself, had earlier said he was in favour of ''just bloody well getting on with it''. He said retailers as a group overrated parking.

''It would be an issue if we were competing with stand-alone malls, but we are not.''

He recalled battling with other retailers 20 years ago about removing some parks in the central retail area to plant trees, an amenity improvement that had proved successful.

''We have debated this [the cycle lanes project] long enough,'' Cr Thomson said.

Engineering to improve the safety of multi-modal transport had been missing from Dunedin's transport network for probably 50 years, despite safety improvements in every other area.

The potential cost of $350,000 for the project would be an investment lasting 30 years, making it an ''extraordinarily small sum'' to reassure safety.

Deputy mayor Chris Staynes agreed taking away car parks had long been, and continued to be, an emotive issue in Dunedin, but it made no sense.

''It's a perception [that business will be harmed by the removal of some car parks], but it's only a perception and it could be a perception that could derail a great project.

''If we want to be a great small city in the real world [by providing improved amenities and multimodal transport options], this is what we need to do.''

Parking was the only fly in the ointment at this stage, Dunedin Mayor Dave Cull said.

Councillors approved his suggestion a new working party be set up comprising him and various other councillors to help advance the business cases and the mitigation plan.

The council's parking study (between December and March) found:

• Areas with the highest parking occupancy around the university and hospital, both of which prefer the option removing the most parks

• Retailers think 65% of customers drive to their stores, when actual figure is 53%

• When drivers cannot find a park nearby, 35% keep driving around until they do, 22% park further away and walk, 36% park in an off-street car park and 7% go home or elsewhere.