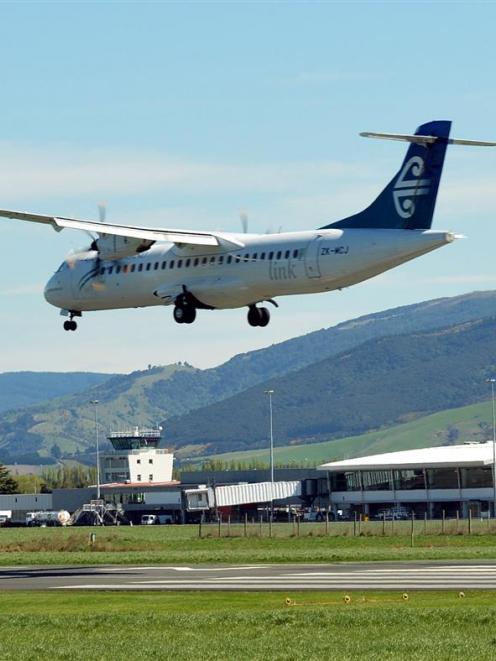 A flight lands at Dunedin Airport. Photo by ODT.
Dunedin businesses are suffering from what they say is a poor domestic air service that is not helping economic development.

And prices on some Dunedin routes appear much higher than similar flights elsewhere in New Zealand.

''It gives people the impression that Dunedin is quite a difficult place to get to, to do business,'' Otago Southland Employers' Association chief executive John Scandrett said.

''That's not something we want to encourage.

''People need to be able to get here to do business, and get home on time.''

However, work was going on behind the scenes, Mr Scandrett said, and there was a possibility of changes coming up.

Although there was no confirmation yesterday, the Otago Daily Times understands schedule changes may be announced soon.

The concerns follow news last week Virgin's direct flights between Dunedin and Sydney and Melbourne this summer had been cut.

That means services to other centres, such as Christchurch, are now essential for those wanting to link by plane to overseas flights.

Anyone wanting to book a flight yesterday to Christchurch on Air New Zealand for today would have been out of luck; the airline's website said the flights, which would have cost $316 one-way, were booked out.

A Wellington to Christchurch fare on Air New Zealand booked yesterday for today would cost $174, and just $59 next Tuesday.

Jetstar fares from Dunedin to Auckland range from $369 tomorrow to $85 if booked a week ahead, while Air New Zealand would cost $499 to $169 a week out.

Air New Zealand dropped direct flights from three to two a day earlier this year, with the last direct flight back to Dunedin leaving during the afternoon.

He had been attending regular meetings in the city for the past 19 years, and the changes had made that harder.

''It just means there's less time to do the things you're trying to do,'' Mr Preston said.

''If you're having a meeting, you need to start thinking about leaving early.''

Otago Chamber of Commerce chief executive John Christie said he was hearing from business people the Auckland changes had made travel there ''certainly less convenient''.

The loss of the international flights was ''in a way a bigger issue'', he said.

There was a cost to businesses of the delays, caused by waiting in airports for connecting flights.

Mr Scandrett said the business community had a growing concern about Air New Zealand's flight schedule, particularly on the Dunedin to Auckland service.