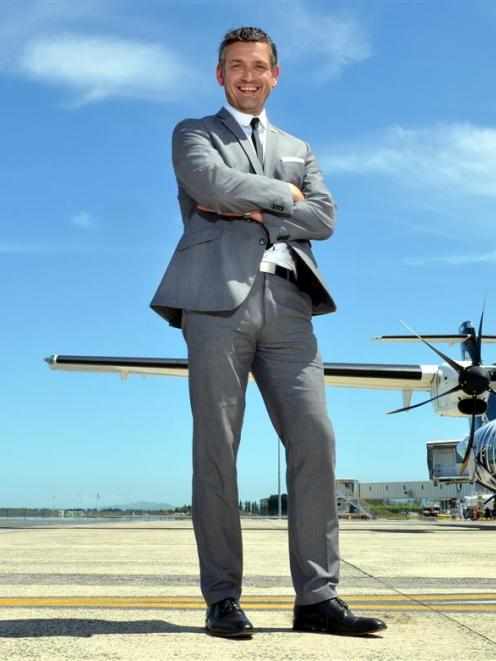 Mr Roberts (48) was named yesterday as the successor to the airport's long-serving boss John McCall.

Originally from Barnsley, Yorkshire, Mr Roberts has worked at the airport for 15 years and is infrastructure and service delivery general manager.

Mr McCall, who retires at the end of March after more than 26 years with the company, described it as a ''momentous time'', with Mr Roberts only the second chief executive in its history.

Outgoing and personable, Mr Roberts is effusive in his praise for a city and region which quickly became home for him and wife Louise.

The couple arrived in New Zealand in 1996.

Their two teenage daughters, Avi and Ella, were both born in Dunedin.

Previously, Mr Roberts achieved a first-class honours degree in engineering with business studies at Sheffield Hallam University and worked as a project engineer, involved in a wide range of engineering projects around the UK.

His wife came to New Zealand on a six-month contract to work as an occupational therapist and he came to visit and was ''sold'' within a couple of days.

In Dunedin, he was captivated by the environment, the people, their friendliness, the beaches and the peninsula.

While Dunedin was now home, that did not mean he forgot his roots.

Barnsley was perhaps best known for its prominence in the coal mining industry and Mr Roberts' father was a miner who looked after pit ponies.

It was a great community but also ''pretty hard'', he said.

As well as being an enthusiastic ambassador for Otago, Mr Roberts is passionate about the industry in which he works.

While reluctant to address specific issues prior to officially taking over in April, Mr Roberts said his appointment was an ''absolute privilege''.

He is excited and delighted to lead a business that makes ''such an important contribution'' to the local, regional and national economy.

Asked his vision for the airport, Mr Roberts said it was a shared vision for the city, as he felt strongly about the need for it to work together ''because we're too small to work in isolation''.

'' Each individual component is extremely important. We need to be on the same page with a shared vision ... The potential is incredible.

''We must co-operate, collaborate and communicate to become working partners who have a shared vision and focus.

"We have so much to offer and we just need to get out there together,'' he said.

The airport was a facilitator and it needed to be ready to respond to growth in the city.

Dunedin needed to be sold to the rest of the world, he said.

Asked what sort of leadership style could be expected of him, Mr Roberts said it would be one of openness, honesty, communication and trust.

Mr McCall had been a mentor to him - ''kind of a second Dad to me'' - and the pair had worked in a collaborative style for many years, he said.

Dunedin International Airport chairman Stuart McLauchlan said the board was delighted to have appointed Mr Roberts after an ''extensive search'' which attracted a significant number of high calibre applications.

Mr McCall said Mr Roberts was a natural leader who was committed to the industry and would ''do a fantastic job''.