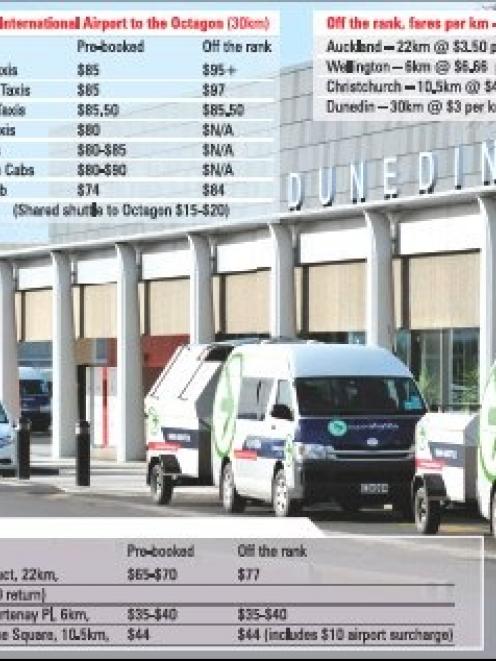 Renting a budget hire car is now cheaper than hiring a taxi from Dunedin International Airport into the central city, as taxi fares climb towards the $100 mark for the one-way, 30km trip.

Air travellers long disgruntled with expensive Dunedin flights now face rising taxi charges of between $70 and $100 and beyond for the airport to Octagon journey.

There are shared shuttle services for less than $20, but there is no public transport.

Dunedin, while having the longest journey with the highest price, does come up trumps with the lowest per kilometre charge at $3. That is cold comfort when the average off-the-rank taxi cost is $90 per trip.

While fixed corporate pre-booked taxi rates in Dunedin have recently been hiked by less than $2, to about $70 from the airport, a clutch of recent taxi receipts from another off-the-rank provider reveals fares of $90, $92 and $94 for the 30km, 25-minute trip.

However, cheaper than any of the eight taxi services contacted is a budget car rental business servicing the airport offering a vehicle for $50 per day, plus fuel costs - which would keep the cost at less than $60 for one trip.

A spokesman for Able Rental Cars was not aware of anyone having taken this option to avoid taxis, but said it was a popular service.

While lack of airline competition has left Southern travellers often isolated from cheap fares in and out of Dunedin, there are at least eight taxi companies servicing the wider Dunedin area.

An anonymous call-around of the eight companies revealed the cheapest pre-booked cab was $74, rising to $90, while off-the-rank prices ranged from $84 to $97.

Otago branch spokesman for the New Zealand Taxi Federation Murray Alcock, who is also chairman of Dunedin Taxis, said, when contacted, the federation had fielded complaints about Dunedin airport fares ranging from $90 up to $120 for the one-way trip.

He said the surcharges of individual companies often pushed up fares, which could be on fuel or for Eftpos charges for accessing mobile phone lines.

The airport also tendered out its taxi rank use, which was a cost that could also be passed on to taxi customers, he said.

While acknowledging fuel prices had dipped 10 consecutive times into mid-June, they had since risen again to near record prices; the latest being a 7c increase in petrol prices this week.

''We have kept an eye on [petrol] prices, but haven't had a surcharge in place,'' Mr Alcock said of the latest four fuel price increases.

He urged taxi users to check the list of potential surcharges, which taxi companies must display in the cabs.

He was aware Dunedin fares were competitive at $3 per kilometre, but noted that if flights were cancelled because of bad weather, drivers could have a five to to six-hour wait.

''We try and keep fares realistic, but drivers also have to make a living,'' Mr Alcock said.

For several companies, having large corporate accounts with set fares was key to operating in Dunedin, and some charged off-the-rank airport customers the same rate as corporates, when returning to the city from an airport drop-off, he said.

one more high profile than the other.

Both ranks are understood to be worth tens of thousands of dollars to the airport, where the taxi operators can charge drivers per month, which can, in turn, be passed on to passengers in fare surcharges.

Dunedin International Airport chief executive John McCall said, when contacted, and said airport rank tendering was used around the country, and it was bidding by taxi companies which set the overall fee, but he declined to reveal what the two ranks respectively raised for the airport.

''They set the price through tendering . . . so it's up to them whether that is passed on or not,'' he said.

Mr McCall said business travellers had recognised there was an option to rent a car.

''You can hire a car for $50, or less, per day. There's a lot of day visitors to Dunedin doing this, especially those on business,'' Mr McCall said.

He noted the airports of Auckland, Wellington and Christchurch were on local authority bus routes, while Dunedin's airport was not and it had been ''many years'' since a public service was offered.

He said that periodically, local transport operators had looked at a public services to and from

the airport, but none had come up with a commercially viable business model.

''Customers do have a lot of choices [rental, shuttle, taxis], except for a regular, scheduled public service,'' Mr McCall said.

Local authority bus services, in Auckland, Wellington and Christchurch are subsidised. Mr McCall noted many of ''top tier'' rental car agencies also operated other subsidiary brands in the second and third tier of the rental ranges, to capture the less expensive end of the market.