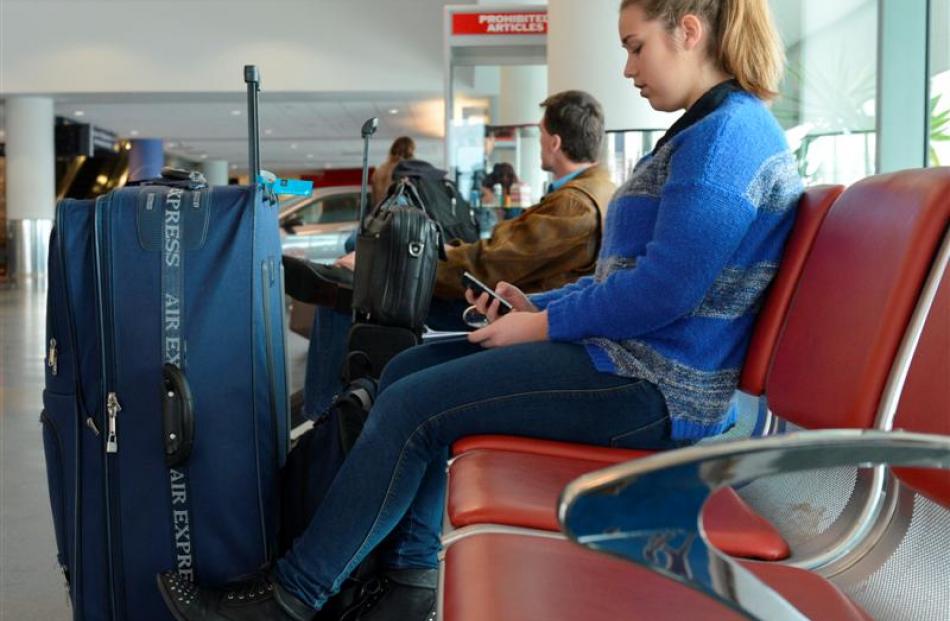 Melissa Giddens (18) waits for her flight out of Dunedin to Wellington after a raft of flights from Dunedin International Airport were cancelled yesterday. 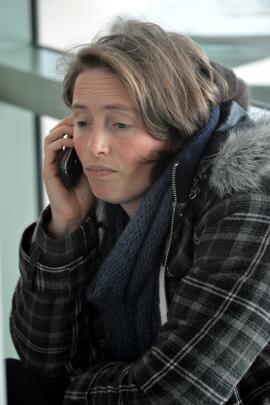 Catherine Croft waits on hold as she tries to rearrange her flight. 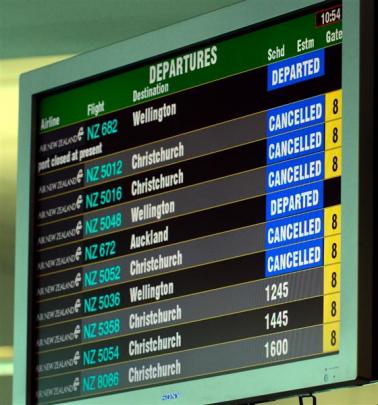 The departure board at the airport yesterday. Photos by Gerard O'Brien.

Passengers were left stranded in Dunedin yesterday after 11 flights were cancelled because of poor conditions at Wellington and Christchurch airports.

The first flight from Dunedin Airport yesterday took off at 12.30pm, instead of the scheduled 6.50am, and the first plane landed at 1.15pm, instead of 8am.

Frustrated airline customers stood aimlessly in the departure lounge after being told to go home and call reservations to obtain an alternative flight.

Adding to the number were the many University of Otago students who had booked flights home for their mid-year break. Geology student Melissa Giddens will arrive at her home in Napier at least 48 hours later than planned.

Her Air New Zealand flight at 10.30am was cancelled yesterday and she will now fly out at 1.30pm today.

Auckland University PhD student Catherine Croft's frustration grew yesterday when she was told her Air New Zealand flight was cancelled and she could not get on another flight.

''We have been told to go home and call reservations. My home is in Auckland. I'm supposed to be at work tonight.''

Air New Zealand communications manager Andrew Aitken said flights throughout the country were delayed yesterday and passengers would be re-accommodated on the airline's next available service, as per standard procedure.

However, given the nature and size of the disruption, not all passengers could be accommodated on services yesterday.

''Our team at Dunedin Airport managed a large number of customer bookings today and it is not unusual for our ground staff to encourage passengers to return home and rebook their flights if there is likely going to be a longer delay and a long wait time at the airport.''

Dunedin Airport chief executive John McCall said he sympathised with the passengers but the cancellations were out of his control, as the disruption was at Wellington and Christchurch airports.

''Friday is typically busy, anyway, and there is normally no spare seats available, so it is very disruptive.''

The airport's main runway had a dusting of snow and hail yesterday morning but had been cleared by 9am, he said.

Six Air New Zealand departures were cancelled, destined for Christchurch and Wellington, as were five arrivals from the same destinations. Mr Aitken said passengers whose travel plans have been disrupted should consult the arrival and departure information on the Air New Zealand website.