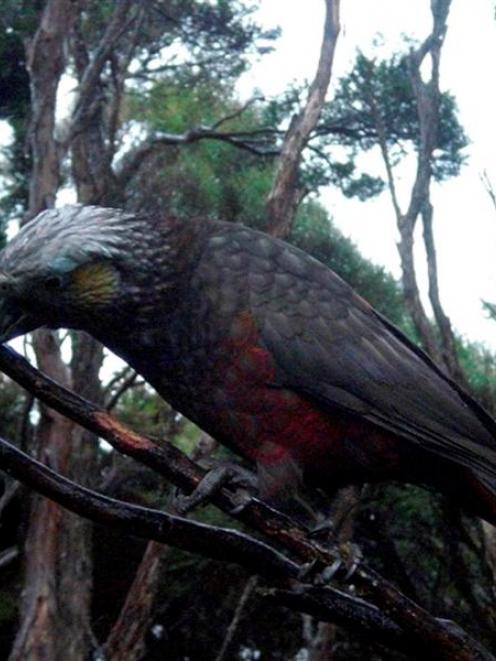 One of Mr and Mrs Roto's 3-month-old kaka fledglings at Orokonui Ecosanctuary. Photo by Orokonui Ecosantuary.
It appears a little freedom might have been all it took for the kaka known as Mr Roto and his partner ''Mrs Roto'' to reignite the fires and breed.

The former Dunedin Botanic Garden kaka had not bred since being moved to Orokonui Ecosanctuary aviary in 2007. He was hand-raised as a chick at the gardens after his mother was killed on the nest by a stoat.

''We had hoped they would breed but they didn't seem interested,'' Orokonui general manager Chris Baillie said.

Mr Roto, who turned 20 this year, came to the ecosanctuary with his mate as ''aural anchors'' to help keep introduced kaka within the predator-proof fence.

The pair were released in 2011 from the ecosanctuary's aviary when the space was needed for an injured kaka.

Ranger Kelly Gough had her suspicions of an impending family as Mr Roto's food consumption had increased hugely.

''It was very exciting when he was spotted at the aviary feeder with three chicks in tow.''

This week ''Mrs Roto'' was seen close to the aviary with three chicks which had just left their nest, plus another one not far away, as was Mr Roto.

''Mrs Roto hasn't been observed for at least a year.''

Two other banded birds which had not been seen this year and an unbanded adult were also spotted.

''This means that all 23 banded birds and the one unbanded adult have been identified this year.''

It appeared the ecosanctuary had at least three successful nests this season, one clutch of four, one of three and one of one.

''So our kaka population must be around at least 31. I'd say we are away laughing now.''