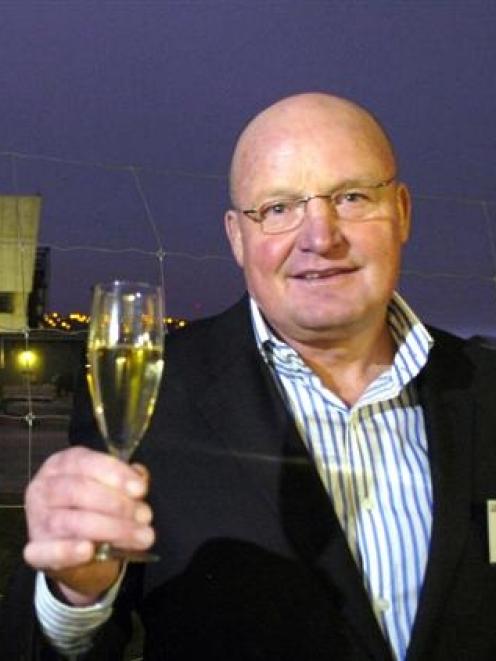 Arrow International Group Ltd director and founder Ron Anderson raises his glass at the construction company's 25th anniversary celebrations at the Forsyth Barr Stadium construction site, in Dunedin, last night. Photo by Jane Dawber.
"We started out with no clients and no income. All we had was a $200 typewriter and an office in the basement of a building in Clark St."

But construction company director and founder Ron Anderson said he had an idea to revolutionise the construction industry in New Zealand and the passion to make it work.

In 1984, construction companies had their own tradesmen.

But Mr Anderson decided to set up a construction company like a management company which contracted tradesmen to do the work.

"We were the first to be a management company in New Zealand to do construction."

Mr Anderson, speaking at the firm's 25th celebrations in Dunedin last night, said the early days were difficult, but his "passion to do something different, to succeed and the ability to encourage staff and clients" had gained the company the reputation it needed to get from "there to here".

Arrow now has offices throughout New Zealand and Australia, and Mr Anderson took pride in looking back on some of the company's construction projects, which included the Dunedin International Airport, the Meridian Mall, developments at Cadbury, the base facility at Coronet Peak, Queenstown Airport and even the restoration of Scott and Shackleton's huts in the Antarctic.

However, he is proudest of Arrow's construction of the Forsyth Barr Stadium in Dunedin - the company's largest project.

"If we started out and imagined we would be doing something like the stadium, it would literally have been a pipe dream.

"It's the most iconic stadium in New Zealand.

"It's the biggest thing done in Dunedin since it had the World Expo here in the early 1900s.

"For Dunedin, this is massive."

About 100 people attended the function at the stadium construction site last night.