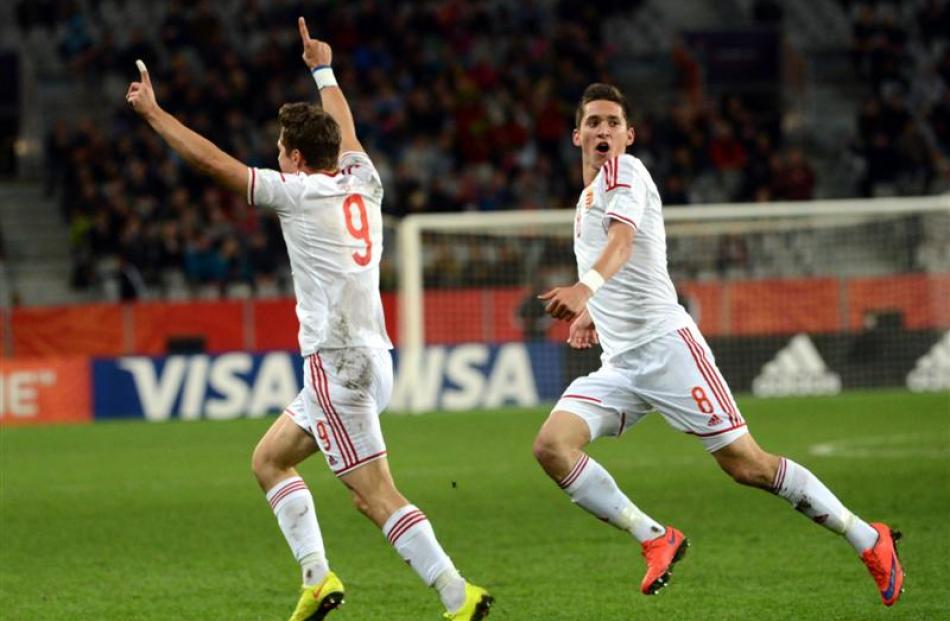 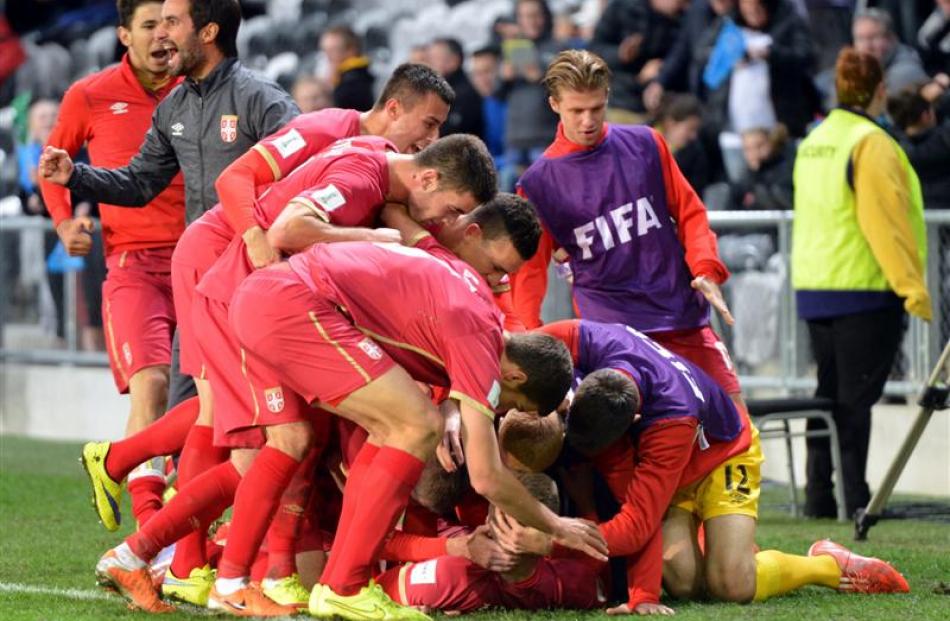 A Dunedin crowd used to lines of large men thundering into each other with ball in hand turned out to a football match this week, as Serbia took on Hungary in the Fifa Under-20 World Cup. David Loughrey hid among the spectators in row Z, taking notes on the ebb and flow of the game, and the madness of crowds.

Zsolt Kalmar took a pass about 20m from the goal, the studs of his boots barely brushing the quivering blades of grass that stood trembling and awestruck in the wake of his power and skill.

The tip of his boot began a cheeky flirtation with the football, gently tickling its underside, before dancing gently across the black and white pentagons to caress it into position to have its way with the full figured sphere.

But as boot and ball prepared to go all the way, Kalmar suddenly stopped, deftly changed direction as Serbian players flew around and past him, and in this maelstrom of sweat, shouting and exertion, lightly flicked the expectant football to Bence Mervo.

Mervo accepted the quivering prize; mid-stride he dropped the ball on to the grass directly in front.

The quadriceps muscle in his long right leg tensed as the footballer drew the leg back, bent it slightly at the knee, then, with an explosion of brute power, swung it thundering with full force, slamming the football past the desperate goalkeeper deep into the back of the net.

This, then, is football - a game that hurtled this week with boundless energy from end to end of the renamed Otago Stadium.

Mostly quietly, and with a reserved southern demeanour, the Dunedin crowd looked on as the likes of Serbia's Rajkovic, Veljkovic, Maksimovic and Gacinovic took on Hungary's Zsoter, Kecskes, Szekely and Osvath.

Almost 4000 people were perched together on the edge of mountainous slopes of the stadium's north stand.

Row Z is tucked just under the stadium's inflated roof, and is possibly, next to a drone's-eye view, the best place in the history of everything to watch football.

The sheer altitude of seating, coupled with the vertiginous aspect, adds a real flutter of both fear and excitement to the event.

There were, however, issues to be dealt with before full enjoyment of the game could be had.

The first was ascertaining which team was which.

One was wearing red, and the other white, and players appeared at different times on all parts of the field, apparently without rhyme or reason.

Incorrect rumours began to shoot from row Z to nearby rows X and Y, and loud debates broke out as to whether Serbia or Hungary had the ball.

Facts were thin, though Hungary's location in the Carpathian Basin and its border with Slovakia to the north was brought up by one punter as a reason that team might be wearing red.

Another raised the Slavic migrations to the Balkans from the 6th Century onwards, and suggested that meant Serbia was dressed in white.

The debate continued through matters from the Ottoman empire's annexation of the territory of modern-day Serbia in the 16th Century to the Mongol invasion of Hungary in 1241.

One woman raised the Hungarian king Andrew II's Diploma Andreanum, which secured the special privileges of the Transylvanian Saxons, but she was shouted down.

The argument was becoming heated and ominous, with the relationship between the subjects and team colours quickly shunted into the background, when a clearly knowledgeable gentleman nearby, with red/brown hair, children, and a pottle of chips, advised Hungary was wearing white.

After another 15 minutes' debate, it was generally agreed that meant Serbia was wearing red.

From time to time players fell in dramatic heaps on the ground, and despite the agonising pain they were clearly in, were surprisingly ignored by their own medical teams, and managed to get up as soon as it was clear nobody was looking.

The action, despite being at all times frenetic, became lacking in results, or any sort of score to give heart to one side or the other, with plenty of kicking but no goaling.

Debate in the crowd turned to importance of fat men and people with bizarre haircuts in sport.

In times when a game lacks impetus, the exploits of a corpulent player, or perhaps a player with dreadlocks or vertical hair, can entertain the masses baying for action.

Just then, Kalmar swept down-field to put his at times struggling team in front, breaking a tight game wide open.

Nothing like the success of an underdog can capture the heart of a Dunedin crowd fresh from a week of flooding, and bickering among themselves about who was to blame, God or the city council.

Every man, woman and child was clearly backing the Hungarians to take the game, when agonisingly close to the final whistle, Serbia finally turned its dominance into a goal, the scores were locked, and extra time was called.

The intensity increased as 22 young men surged up-field and down, beating the turf into submission with their brightly coloured boots for close to 30 minutes, before a heartbreaking own-goal from Hungary - agonisingly close to the time a firing squad-like drama of a penalty shoot-out would have settled the matter.

And there is nothing like the last-minute resurgence of a European team to capture the heart of a Dunedin crowd fresh from the trauma of a magnitude 4.7 earthquake 30km west of the city. How we cheered for our new young heroes.