Hard to grow? Get off the grass 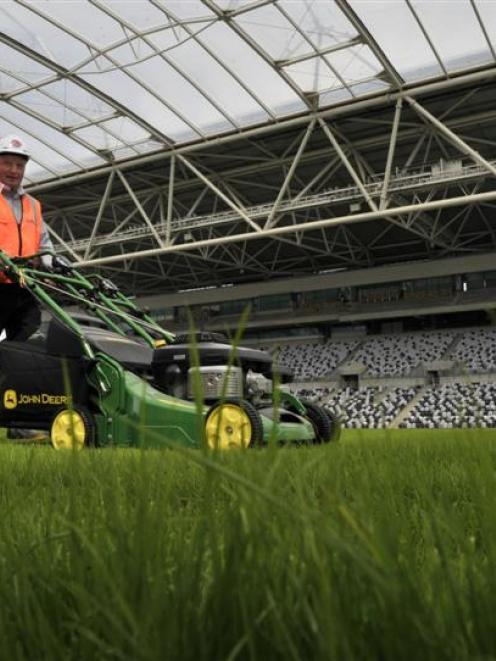 And Carisbrook Stadium Trust (CST) chairman Malcolm Farry, clearly remembering those who said turf could not be grown, invited a swag of media to the event, which he described as an "historical moment".

The possibility of problems with turf growth were raised as early as 2007, when a test rig with an ethylene tetrafluoroethylene (ETFE) roof was set up so turf consultants could watch and monitor grass growth under simulated stadium conditions.

In 2008, turf growth was described in peer reviewers' reports as being a "significant risk", but in 2009, the growth in the experimental rig was pronounced a success.

At the stadium yesterday, the grass appeared thick in the turf, and while watching grass grow has never topped the entertainment ratings, representatives from the CST, Delta and Arrow International looked pretty pleased with their job.

With the stadium's Desso Grass-Master system of artificial turf expected to be added in April, CST trustee and Arrow International director Ron Anderson said the stadium could give a clear assurance to the Rugby World Cup the turf would stand up to the punishment during the event later this year.

For Jeff Wilson, who attended the event, the stadium made him wish he was 10 years younger, so he could "strap on the boots" and play at the facility.

He had been keeping an eye on the project from North Harbour, where he is assistant coach, and said visiting the venue was "stunning" and it was a credit to everyone involved.

Operations manager Coryn Huddy said looking after the turf would be "slightly different" from at Carisbrook.

"We will be under pressure a lot more," he said, as the turf would be used more than it was at Carisbrook.

That meant more work "nursing" the grass along, and ensuring the environment was good for growth, using the monitoring equipment installed.

Delta's role in installing the turf was now complete, he said.