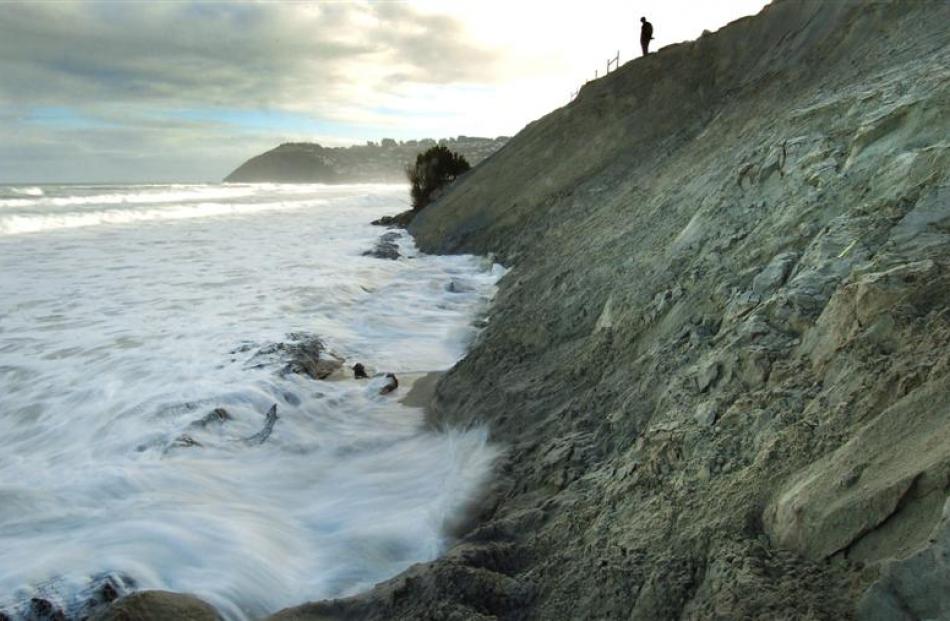 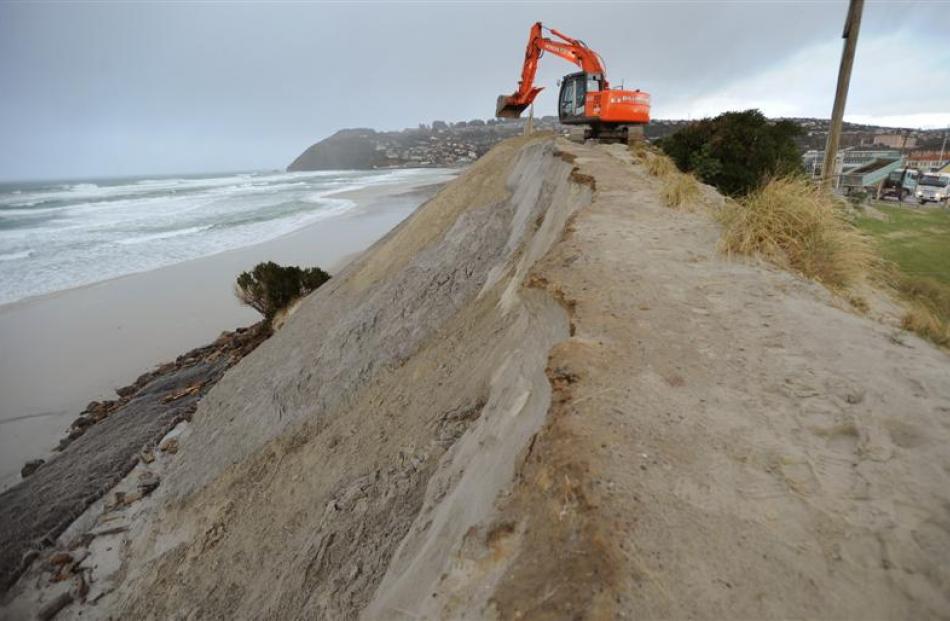 Contractors dump sand on to the dunes at the end of Moana Rua Rd. Photo by Stephen Jaquiery.

Dunedin is on "high alert" as its beaches take another hammering from king tides and winter storms that have caused the worst damage since emergency powers were invoked in 2007.

"Reno mattresses", made of steel mesh cages filled with rocks, part of interim protection work done in the past two years, have been exposed by the sea at Middle beach, and an extensive amount of sand has been lost from the Lawyers Head end of the beach.

Freshly dumped sand was being washed away from Middle beach as the tide rose yesterday afternoon.

Dunedin City Council community and recreation services manager Mick Reece said yesterday the high tide was "the last aria" in a drama that had been ongoing for a week.

While St Clair beach was holding up well, the profile of the beach had taken a battering further east.

"People are saying they haven't seen that much sand taken off the Lawyers Head end in a long time."

The council had been learning about the oceanography of the area, including that sea movement caused by White Island could be having a significant effect, Mr Reece said.

"The guts of it is the Moana Rua Rd edge is gone, and we're steadily losing the toe of the dune."

It was the first time the reno mattresses had been exposed since they were put in place two years ago. They had slumped forward, and the sea had been eroding the dune behind. Contractors next week would build a new mattress and place it behind and beneath the existing ones.

The battle between surf and turf has been going on since the 1800s, when families began settling what had been a swampy marshland.

In 2007, storms caused major damage to the beaches. The situation was exacerbated by vandalism to "sand sausages" - geo-textile bags filled with sand and laid to protect sand dunes - that were uncovered at the time.

Sand was taken from the dredge New Era and dumped near Middle beach to help shore up the dunes.

The council applied to the Otago Regional Council in March for retrospective resource consent for the work already done and any further measures required. That was granted yesterday.

Council community life general manager Graeme Hall said the DCC had set aside $400,000 for the next three years to deal with the problems until a longer-term solution was found.

No money had been set aside for a long-term management plan.

"When the plan comes out, it may or may not need to have capital," Mr Hall said.

Data collection and public consultation have been under way since the latest problems began. Public hearings were held last year and, in April, a project team was put together to prepare a draft long-term management plan.

Mr Reece said technical data was still to be collected, but he hoped the project team would meet in early September to start work on the plan.

More consultation and hearings would follow, the plan being due for implementation in 2011.

The sand being used had been dredged from the harbour. The council's contractors would return regularly, including after yesterday's high tide, to dump more sand, until the high seas abated, Mr Reece said.

While parts of the North Otago coast have seen major erosion in recent years, Waitaki District Council assets group manager Neil Jorgensen said he was not aware of any issues.

A closed section of Beach Rd, south of Oamaru, was still eroding.