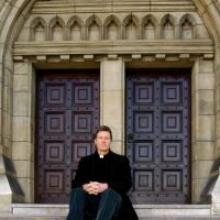 He has been chosen as the new Bishop of Waiapu, a diocese that covers much of the North Island's east coast, including Hawkes Bay and Bay of Plenty.

Mr Rice (46), who will be based in Napier, said the decision to seek the position took a lot of conversation and prayer but felt like the right thing to do.

He saw his election as evidence of a growing desire within the Anglican Church to see the next generation of leaders begin to emerge.

Mr Rice was appointed Dean of Dunedin's Anglican cathedral in 2001 and arrived in January 2002 with wife Tracy and two children Ian and Zoe. Bishop of Dunedin, the Rt Rev George Connor, said he would be sorry to lose the ‘‘friendly'' dean, who had done much to connect the cathedral with the city, Octagon, University of Otago and diocese.

Mr Rice said a highlight of his appointment to Dunedin was seeing the cathedral ‘‘come to good health'' after a ‘‘very unstable'' time.

‘‘It's gone from a place of great instability to a place of stability in terms of spirit and its economic make-up.''

Mr Rice said he was proud of the work that had gone into the cathedral becoming the ‘‘heart of the city'', a place which was welcoming, safe and comfortable and marked events which touched people's lives - ‘‘giving thanks for where and who we are''.

Mr Rice was born and raised in Lexington, North Carolina, and he won an athletic scholarship to Lenoir-Rhyne College where he played tennis and American football.

He later won a place at the Duke University Divinity School, gained a masters degree in divinity and trained for ministry in the Methodist Church.

In 1991, the Rices came to New Zealand, and for two years Mr Rice served as minister to the Thames Uniting Parish before returning to North Carolina.

They returned to New Zealand about three years later serving in the Mt Herbert parish on Banks Peninsula for four years.

Mr Rice's last service in Dunedin will be in May, although a date had not been finalised with his ordination scheduled in Napier on June 7.