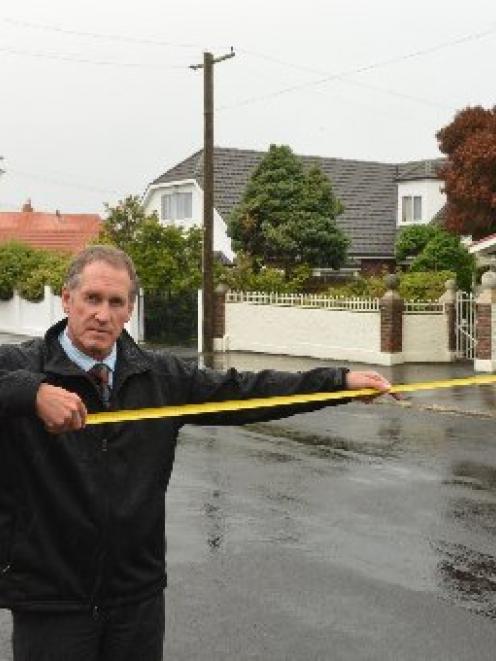 Wayne McFarlane shows with a tape measure how far the council believe all the properties behind him encroach onto council land. Photo ODT files
Jeannie Coburn and her St Clair neighbours Sharon McKay and Wayne McFarlane are steadfast in their fight against the Dunedin City Council over historic boundary encroachment issues.

Miss Coburn had until yesterday to respond to a letter from the council, which told her she had the choice of buying 1.5m of council road reserve land on which the fence and carport of her Ings Ave property sit, applying for a licence to occupy the land, or removing the fence and carport.

Ms McKay and Mr McFarlane had until last Thursday to respond to their letter, which outlined the same options for their Ings Ave property.

When contacted at the weekend, the neighbours, who have sold their houses, said they had not responded to the council's letter and had no intention of doing so.

''We are doing nothing about it,'' Ms McKay said.

While they were committed to not making decisions that would affect the future occupiers of their houses, council transportation policy engineer John Visser said the council would not chase the present occupiers any further.

However, they would bear liability for any issue associated with the boundary area which might arise in the future.

When asked if the council's policy was one of transferring liability, Mr Visser replied: ''Absolutely''.

He said making a decision would not cost the present occupiers anything, although he did concede the cheapest option - applying for a licence to occupy the road reserve - would cost them $50.

The council had not initiated the enforcement of the encroachment policy, he said.

When asked who had brought the Ings Ave issue to council attention, he said: ''It's another party that triggers it, wanting to know whether it [the land] is theirs or not''.

''It could be the owner, the buyer, a builder, a lawyer, a real estate agent or a neighbour.

''The key in all of that is it's not the council raising them. It's raised by another person and then we need to respond correctly.''

A ''substantial report'' on historical boundary encroachment issues would be tabled at the infrastructure services committee meeting on April 1, he said.

University of Otago surveying senior lecturer Dr Mick Strack said the property owners had another option available to them - ''they could claim they didn't want that land''.

''They could tell council they weren't interested in continued occupation.''

It was his view the present occupiers would not be liable for the cost of removing fences or carports if they decided to no longer occupy the land.