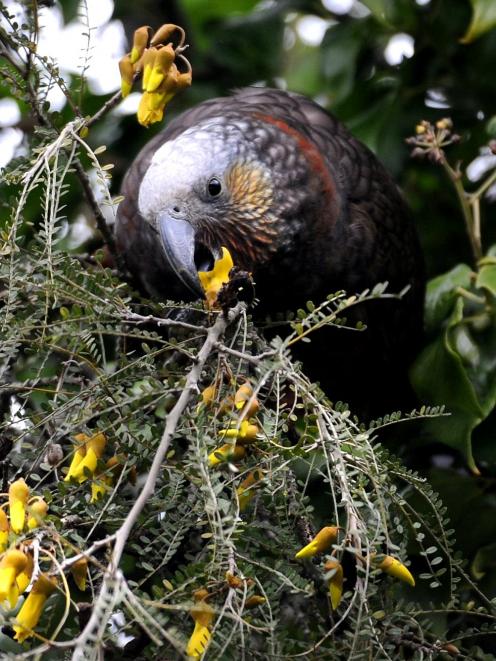 An unbanded kaka on a property on McMaster Rd, Scroggs Hill. Photo: Stephen Jaquiery.
Dunedin is set to gain another feather in its wildlife cap as rare South Island kaka  spread naturally from Orokonui Ecosanctuary.

The sightings were a result of the growing population — which numbered about 40 — at the ecosanctuary and would become even more common as numbers grew further.

"They are pumping out young ones every year and a lot of those, especially juveniles, will be dispersing all over the show."

The sightings included one in Caversham in recent weeks and on Tuesday evening Otago Daily Times staff saw kaka in Opoho and City Rise.

"This is good from our point of view, because if Dunedin wants to have a large robust population of kaka they need to be spread from Orokonui."

For the birds to  breed successfully outside Orokonui, pest control efforts needed to be stepped up as females nested in holes in trees, which left them and their young extremely vulnerable to possums and stoats.

They would likely become especially common around the Dunedin Botanic Garden as they were attracted by the captive kaka that lived there.

"They are intelligent and curious animals, so they will hear other kaka and come down and hang out."

Sightings were also becoming regular in areas close to the sanctuary, including

The increased kaka population in Dunedin would bring some problems as they could be quite destructive and ringbark trees to get at the sap.

The birds would inevitably try to nest, but limited stoat and possum control outside the sanctuary  meant their chances of  breeding would be very slim.

This was why the planned Orokonui "halo" project, which involved pest control in the area surrounding the sanctuary, was so important.

If people  found a nest they could protect it by putting a band around the tree it was on to prevent predators from climbing it. Having a trap at the tree’s  base could make a  difference too.

Part of the aim of the sanctuary was for  the  species to spread.

• Do some stoat trapping.

• Do not give them bread or other processed foods.

• If you see a nesting site ask for advice and consider putting a smooth metal band around the tree to  prevent predators from climbing.