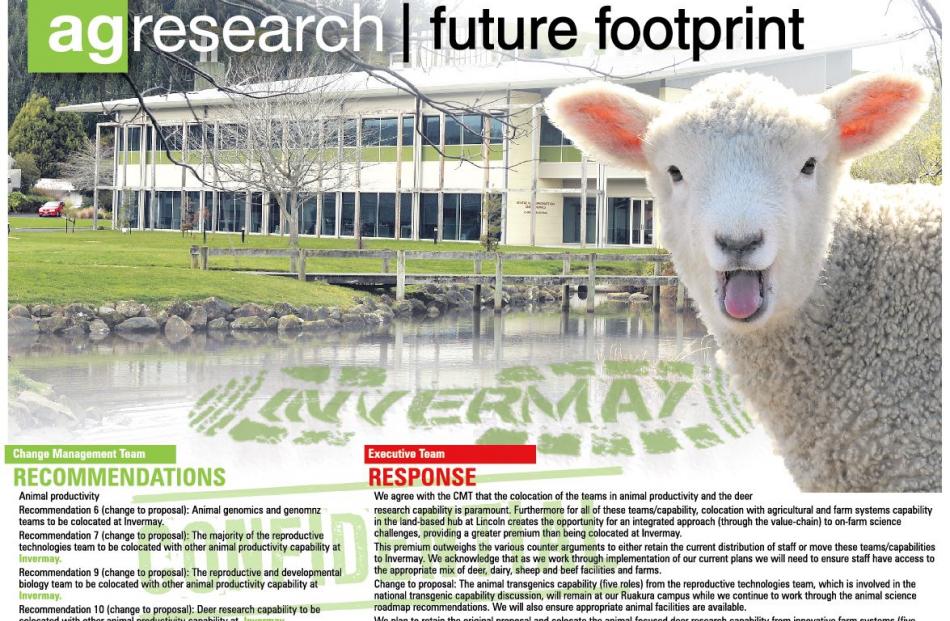 There is anger in the South after leaked documents revealed AgResearch has ignored recommendations to save key parts of the Invermay agricultural research centre in Dunedin.

The documents, obtained yesterday, showed strong opposition to AgResearch's ''future footprint'' restructure proposal from more than 200 staff, including at Invermay.

It also showed AgResearch's own change management team (CMT), appointed to consider the 245 staff submissions, agreed with many of the concerns.

Its recommendations included that key genomic, animal productivity and deer research scientists should remain at Invermay, rather than being concentrated at Lincoln.

The response from AgResearch's executive team, contained in a separate leaked reply to the recommendations, was to reject them.

Dunedin Mayor Dave Cull said when contacted the revelation was ''quite shocking'' and appeared to undermine earlier suggestions the proposal would change.

''This would seem to indicate there was never any intention of change in the proposal. It was perhaps a bit disingenuous and a little cynical.''

''I'm absolutely blown away that they are going completely against their own team that was set up to review this situation.

''It blows their process completely out of the water. It completely lacks any credibility. I'm just astounded.''

The news had left him ''very angry'' and questioning the real motivation behind the restructure.

''There's some other things behind the scenes here. I smell a rat.''

Dunedin Labour MPs Clare Curran and David Clark also expressed their concern at the restructure after visiting Invermay yesterday to talk to staff.

AgResearch chief executive Dr Tom Richardson did not respond to an interview request yesterday, but issued a statement defending the process.

He said the CMT report provided the views of staff, many of whom could be affected by the changes, but had been ''carefully'' considered and changes made ''where we considered it appropriate''.

Staff consultation was now over, but AgResearch would be meeting stakeholders - including Mr Cull - to ''share our thinking behind the current plans''.

He would also be ''happy to consider'' the counter-proposal to be presented by Mr Cull on October 10, and stressed change was more than two years away.

''We will continue to explore any opportunities to improve the work that we do and as new opportunities present themselves we will evolve our plans,'' Dr Richardson said.

The latest revelations came a day after Dr Richardson confirmed AgResearch would be pressing ahead with its ''core plan'', first revealed two months ago, with only minor changes.

That meant about 82 jobs would go from Invermay after 2016, although Dr Richardson said at the time more jobs could be kept in Dunedin if that was proven to provide ''better value for New Zealand agriculture''.

Confirmation of AgResearch's plans this week also prompted anger from one anonymous Invermay scientist, who said there was ''a lot of ill-feeling'' within AgResearch.

''There are some of us who would like to put a vote of no confidence in ... AgResearch management, but that would basically mean being sacked tomorrow,'' he said.

The CMT report underscored the discontent, noting a lack of information, understanding and trust in the proposal among staff.

It warned up to 82% of scientists might refuse to shift and instead quit the organisation, raising the prospect of key staff being lost, it said.

The ODT has also obtained a copy of the Dunedin City Council's submission on the AgResearch restructure, prepared by former Dunedin North MP Pete Hodgson.

It warned AgResearch's plans for a new research hub at Lincoln would see Dunedin's existing hub - built around Invermay, the University of Otago and high-tech companies - ''dismantled''.

The result would inevitably be the complete closure of the Invermay campus within a few years, as remaining staff and empty buildings became uneconomic and were sold, most likely at a loss, it predicted.

That was in stark contrast to the CMT report, dated September 13, which concluded Invermay offered the best base for all of AgResearch's animal productivity scientists, including deer researchers.

That was because its links to Otago University, especially in the field of genomics, and Invermay's proximity to other scientists, related companies and farmers meant it offered the best cost-benefit results.

Staff did not see ''any benefit'' in relocating animal productivity teams to Lincoln, which had a weaker animal science programme, it said.

The University of Otago was New Zealand's best tertiary institution in the field of genetics and genomics, it added.

''The CMT felt that Invermay was a more natural colocation for an animal productivity focus and that a forced colocation at Lincoln is likely to put capability at risk, without yielding significantly greater benefit.''

Staff were also ''strongly against'' the proposal to relocate Invermay's deer research capability to Lincoln, which would make on-farm trials more time-consuming, given much of the deer industry was in Otago and Southland. It would also mean the loss of the ''Invermay brand'', which boasted excellent facilities and deer research farms, the staff worried.

The CMT agreed AgResearch's deer researchers needed to be located with other animal productivity scientists, but said this should happen at Invermay, which offered a more ''effective and efficient'' base.

The report also recommended AgResearch's animal genomics and Genomnz teams remain at Invermay, rather than being shifted to Lincoln.

Their research relied in part on access to sheep flocks, which in the South Island were found mainly in Otago and Southland.

The University of Otago was also the ''most natural'' fit for collaboration in the field, while Lincoln had ''limited capability'', the report said.

Invermay also had better access to a cluster of outside companies, like Silver Fern Farms, and a better concentration of sheep farmers.

A shift to Lincoln would bring some benefits, but Invermay offered ''significantly greater premiums, now and into the future'', it said.

However, the executive response, dated September 26, said concentrating animal productivity teams - including genomics scientists - at Lincoln would allow an ''integrated approach'' with researchers in other fields.

Staff would also need ''appropriate'' access to animals, but the call to keep deer research staff at Invermay was ruled out, it said.

The response would better address ''on-farm science challenges'', and the benefits outweighed those found by keeping key staff at Invermay, it said.