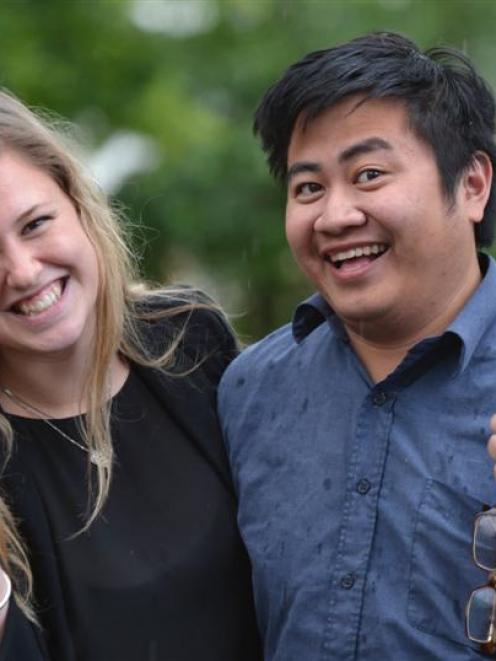 Mr Hernandez is leaving Dunedin after being involved in student politics in the city for almost five years, which included spending last year as president of OUSA.

He leaves proud of his record as president, saying the association made strides during the year.

These included signing a memorandum of understanding with the Dunedin City Council and negotiating the trial of a 25% bus discount for students - something the association had long been fighting for.

He struggled to convert student political success into wider arenas, failing to win a seat on the city council and in a bid for a post in the New Zealand Union of Students' Associations.

He was sad to leave Dunedin, but felt he had little choice after failing to find a job here.

''I did try and look for work in Dunedin, but there is just very few jobs for graduates here.''

He hoped to eventually move back to the city.

''I definitely want to be back in Dunedin. This is a really nice city and I want to live and raise my family in Dunedin one day.''

He will divide his time in Wellington between finishing his master's degree and doing part-time work for Catholic support agency Caritas and a company called Inspiration Education.

He still holds a seat on Otago University's council, which means continuing to fight for Dunedin students and regular visits to the city for meetings.

The biggest concern he has for the future of OUSA is the fact that in a postvoluntary student membership (VSM) environment it is now almost completely reliant on the university for funding - as opposed to being directly funded by students.

''The biggest challenge that OUSA faces is the university relationship. It's really good at the moment, but maintaining that will be a key thing.''

''I actually think [VSM] hasn't helped the relationship. Everyone says it has helped, but at the end of the day you can't have a genuine relationship when it's one party giving the money.''

He is confident new president Ruby Sycamore-Smith has what it takes to run OUSA.

Ms Sycamore-Smith said she had always been ''a good supporter of Fran'' so it would be a matter of continuing his ideas and ''also coming up with some creative and vibrant ideas'' of her own.

Ongoing issues with slow internet access, increasing support for clubs and societies and getting students to vote in the general election are among her priorities for this year.

She decided to run for president after enjoying the step up from campaigns executive to welfare executive last year.

''It was a huge step up and a lot more responsibility, but I kind of enjoyed it more. I got to spend a lot more time at OUSA and was involved in a lot more projects.''