Left luggage comes in all sizes 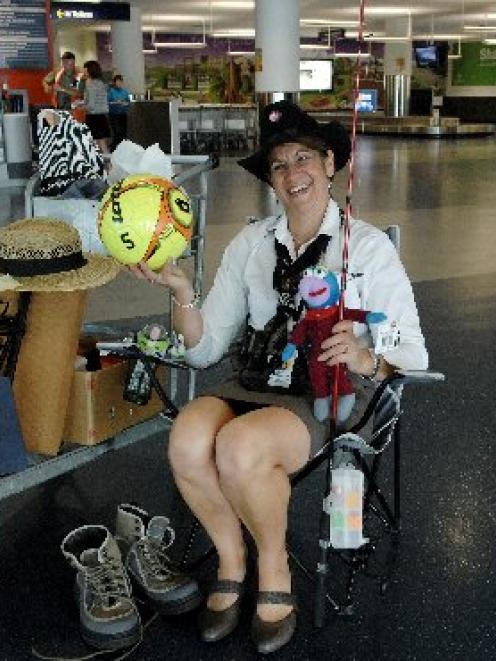 Dunedin International Airport customer services officer Clare Doherty sits yesterday with some of the items travellers have left behind at the facility. Photo by Linda Robertson.
Some people find them stressful, others happy, but one thing is sure, airports make many people forgetful.

During February and March, more than 30 items accumulated in the lost property box at the Dunedin International Airport, including a fishing rod andtackle box, various sets of keys and a pair of tramping boots.

This excluded all the items left in the building and promptly reunited with their owners.

Chief executive John McCall said all sorts of things were left behind, either accidentally or deliberately at the airport.

"You name it, it's there. Sometimes what happens is that people are going to get pinged with excess baggage, so they leave stuff behind," he said.

The number of people dumping items to avoid excess baggage charges became such an issue that a collection bin was placed in the terminal about a year ago.

Mr McCall said everything from duty-free product, to bedding, and more commonly clothing, mobile phones and sunglasses were left all over the airport.

"That's the way it is. People are in a different mindset when they are at the airport than they would be in other places because sometimes airports are stressful places, or sometimes they are happy places," Mr McCall said.

However, just because it was lost did not mean it was forgotten.

"Every day we get inquiries from people. We are able to repatriate a huge amount of stuff.

"We've repatriated stuff back to Australia. That's not uncommon. A lot of effort goes into looking after it."

Items which could not be returned to owners after three months were disposed of, or donated to the Salvation Army, after being advertised in the Otago Daily Times.

"Every situation is different, so we go out of our way to get lost belongings back to their owners."