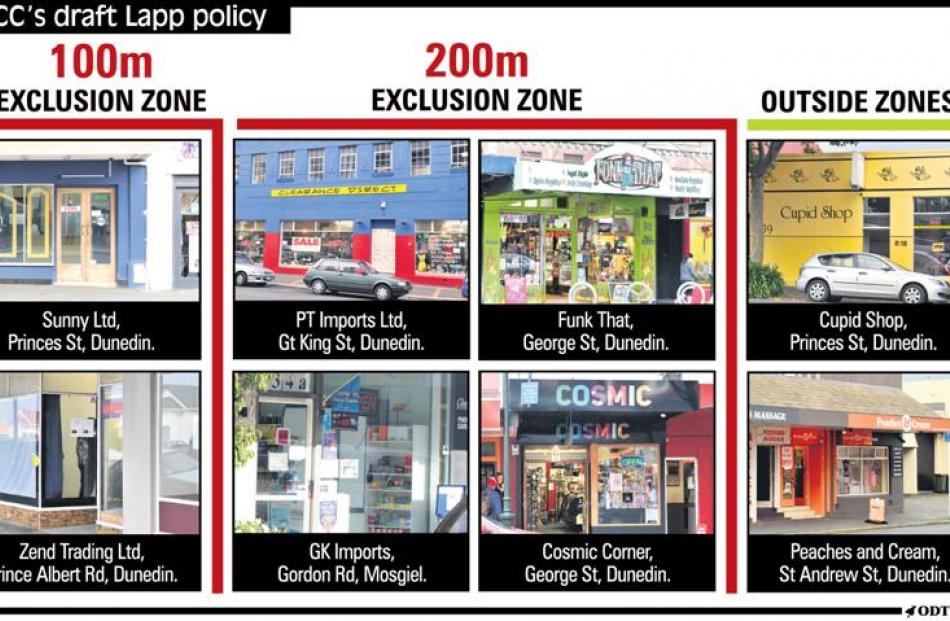 Some Dunedin legal-high retailers could be stubbed out if a substantial exclusion zone is adopted by city councillors.

That gives councils the power to restrict stores from selling legal high products near such places as education providers, churches and community facilities.

Debate on exclusion zones has ranged from setting them at 50m through to 500m, with 100m the most commonly adopted figure.

The draft was set to go before a council workshop by the end of the month, with details ''to be teased out'' by councillors, he said.

If a 100m exclusion zone was set - as in the draft policy - then at least two of the eight legal-high retailers now licensed to ply their trade in Dunedin would be affected.

Supporting Families Otago deputy chairwoman Stephanie Pettigrew said the agency supported families of people with mental illness and it was ''distressing for our staff and clients to have that shop right there''.

''We certainly don't want them as our neighbour.''

An exclusion zone of 200m could potentially affect four other businesses.

PT Imports, in Great King St, trades near Dunedin Hospital, and two George St businesses, Funk That and Cosmic Corner Ltd, are within a block of Knox Church.

In Mosgiel, GK Imports, in Gordon Rd, is near a doctor's surgery.

Adult stores Cupid Shop (Otago), in Princes St, and Peaches and Cream, in St Andrew St, are the two Dunedin retailers that appear to be least affected by an exclusion zone of 200m.

Licences were issued to individual and specific addresses, and could not be transferred to a different person or a different address.

''This is so communities have the opportunity to identify where in their city or district they would prefer licensed retailers to sell approved psychoactive products ahead of the implementation of regulations and the full licensing system.''

He noted the council, in its submission on the Psychoactive Substances Bill, was supportive of the legislation, but asked for two changes.

The passing of the Bill in July last year ''gives the DCC the very power they asked for to develop a Lapp'', Mr Dunne said.

''They know the sensitive neighbourhoods, where the schools are, where the drug treatment centres are. So rather than moaning about these new powers they have, they should be embracing them and making sure they best reflect their communities.''

Councils could choose to push the stores to the outskirts of each community but that went against the spirit of the legislation.

''Councils could choose to do that if they wanted, but they are removing themselves of any responsibility and shifting all control to the criminal black market.

"They are naive if they think banning shops from these areas will remove these products, as that demand will be met by internet sales or tinny houses.''

Since the introduction of the Act, the number of outlets has fallen more than 95%, to about 155, with three out of every four products having been removed from sale.