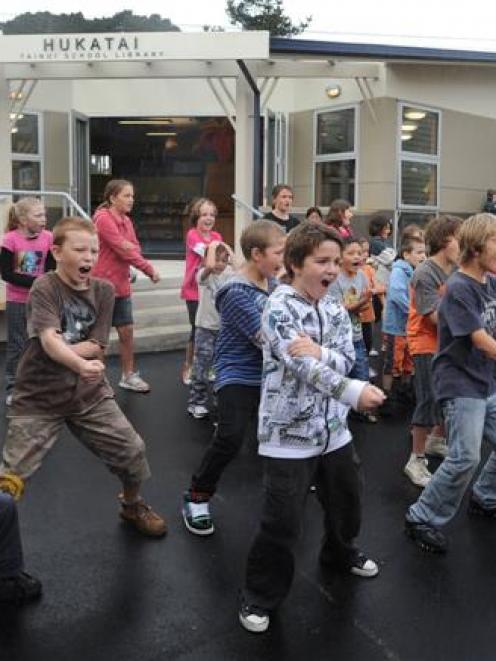 As rain begins to fall, Tainui School pupils perform a haka at the opening of the Hukatai, the school library, in Dunedin yesterday, joined by parent Komene Cassidy. The pupils are (from left) Tumai Cassidy (8), Kaiya Hanley (9), Braidn Teasdale (9), Maatai Glendining-Hoskins (10), Blake McDonald (10), James Te-Pairi (10), Alex Lippert (10), Jack Clement (10), John Campbell (10) and Nick Brosnahan (9). Photo by Peter McIntosh
Although rain meant some of the opening ceremony for Tainui School's $140,000 library had to be transferred indoors yesterday afternoon, it was "a blessing", school principal Ros McQuillan-Mains told about 300 people gathered for the occasion.

Before the rain really set in and the event moved to the school hall, some of the school's 236 pupils took part in a rousing haka with parent Komene Cassidy.

He had earlier explained the significance of the library's name, Hukatai.

This related to the legend of Tawhaki receiving the three baskets of knowledge and the two sacred stones associated with them, Hukatai (sea foam) and Rehutai (sea spray).

The name Hukatai also went along with the meaning of Tainui - big tide, he said.

Mrs McQuillan-Mains later said that given these associations, it was significant that a new entrant with the first name of Tawhaki was enrolled at the school about a week before the opening of the library.

The new building, designed by Ian Macdiarmid and built by Stevenson and Williams, was an 18-month project.

Its interior features a suspended art work of the taniwha Matamata, completed after the school was invited in 2008 to take part in an exhibition in Te Papa.

Other art works exhibited by the school at that exhibition last year also adorn the walls of the new library, which is home to an estimated about 6000 books.

A special guest at yesterday's opening was author and illustrator Gavin Bishop, of Christchurch.