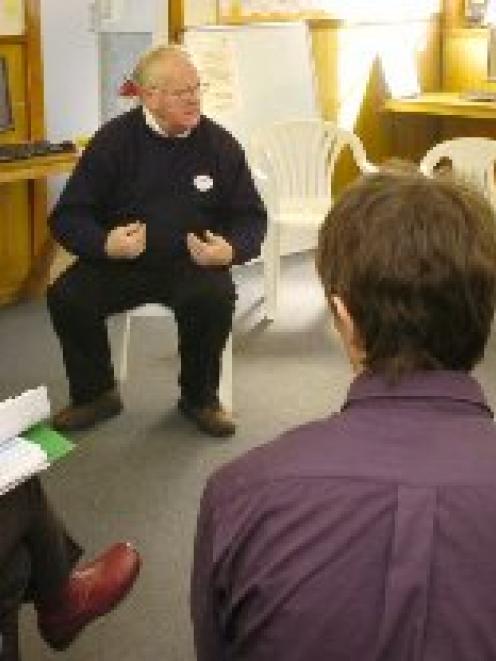 Based on the principles of speed dating and entitled "Float Your Vote", in practice the event, organised by the Dunedin Methodist Mission, was sometimes a case of "find a voter" as takers appeared thin on the ground.

Twenty-four candidates, divided into five groups with separate areas of interest such as environment and planning, strategy and finance, and infrastructure, were sometimes left talking among themselves during the 15-minute time slots.

Methodist Mission chief executive Laura Black said this in itself was valuable, giving candidates a chance to see if they could work together around the council table.

Those who did attend made the most of the opportunity, many staying several hours to discuss the issues.

The format appeared to work well, she said.

Voters had the focused attention of candidates, who listened to their questions and concerns.

Ms Black believed the two hottest topics of the day were the proposed closure of John Wilson Ocean Dr to vehicles, and concerns about council decision-making and consultation.

Cr Neil Collins, part of the economic development group which had no voters when the Otago Daily Times visited, said those who raised the South Island neurosurgery row mis-understood the role of council, whose job did not include advocating for health services as this would interfere with the District Health Board.

However, in the infrastructure discussion group, candidate Richard Thomson, who is standing for the Southern District Health Board too, had no such qualms, saying the council needed to strengthen links with the DHB and Otago Medical School.

Of neurosurgery, he believed the service would be kept, but feared the row would affect relationships with others in the health sector, which could negatively affect Dunedin as a training centre.

Mr Thomson's group was engaged in the most lively discussion when the ODT visited about lunchtime, with Calton Hill resident Dennis Dorney leading a wide-ranging discussion about South Dunedin issues and wider infrastructure and development matters.