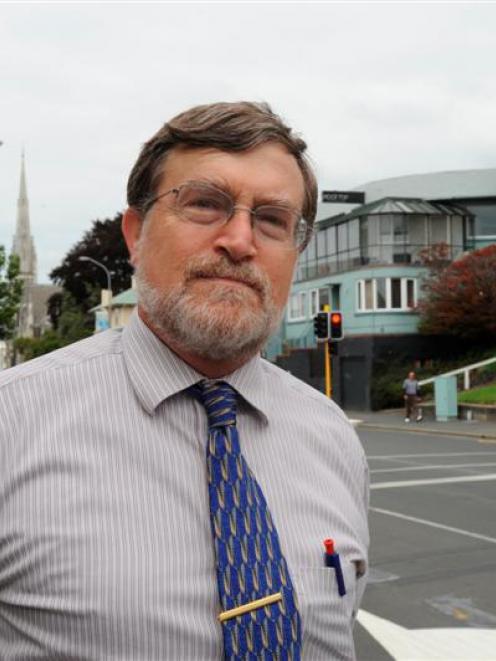 Prof Hank Weiss at the corner of Albany and George St, a spot identified in his study as a danger spot for Dunedin cyclists. Photo by Gregor Richardson.
A University of Otago researcher hopes a map pinpointing the location of every accident involving a car door being opened on a cyclist will encourage authorities to act faster on road safety.

The online map was created by laying data from New Zealand Traffic Crash Reports from 2007-11 on top of Google Maps, and is believed to be a world first. The creation of the map comes after cyclist Dr Li Hong ''Chris'' He (34) was killed after being run over by a stock truck outside Dunedin Hospital last November.

His death prompted a call for cycle safety improvements. The New Zealand Transport Agency (NZTA) is conducting a safety review of the one-way state highway systems through Dunedin after a request from the Dunedin City Council.

The map shows the location of 245 ''dooring'' injuries over the five years, how serious they were and the direction the cyclist was travelling. Of the injuries, 12, or just under 5%, happened in Dunedin. The map data showed about 20% of those hurt were seriously injured and two died.

Director of the university's Injury Prevention Unit Prof Hank Weiss said he hoped the map would get cyclists and the general public thinking about the issue and push the authorities - including the Dunedin City Council and the NZTA - to act faster on cycle safety.

There was ''definitely'' room for improvement when it came to Dunedin's cycle infrastructure and he hoped the city's planners would find the map useful.

As an experienced cyclist, he said there were ''a lot of places'' he was not comfortable riding.

When it came to making improvements, the one-way system was a good place to start, he said.

''Dunedin is unique in that we have the one-way system ... and there aren't many alternatives. That's why I think the review that NZTA is doing is so important.''

Public safety campaigns could only go so far, as people were always going to make mistakes.

''We have ... to design the infrastructure so that when people do make mistakes ... it doesn't end up in a serious injury,'' he said.

Making improvements to the cycle safety could also get more people on bikes, he said.

''We know that the rate of cycling in Dunedin is pretty low and that's because people are concerned about their safety.''

NZTA state highway manager (Otago-Southland) Ian Duncan said NZTA and council staff had started a review of cyclist safety in central Dunedin and would consider the online map as part of that process. An initial report from the review was expected to be presented to council in ''about four to six weeks'', Mr Duncan said.

''This will lead to both a longer-term view as to what a safer central cycling network would look like and ... what `quick wins' can be achieved in the short term,'' he said.

Prof Weiss' idea for the map came after the death of a cyclist on Tamaki Dr, Auckland, in 2010, a roadway shown on the map to have a cluster of crashes.