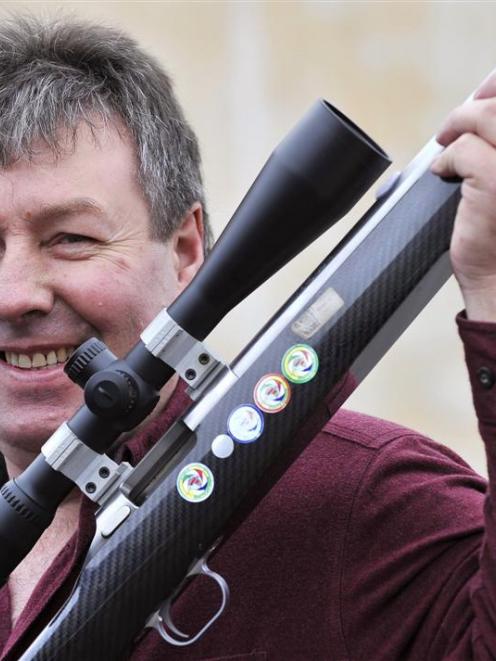 Dunedin man Ian Owen set a world record for benchrest shooters at the world championships in South Africa. Photo by Gerard O'Brien.
With sight in only one eye, a right-handed Dunedin marksman shot left-handed to break the world record over a distance he had never shot before.

Ian Owen had to wait for the breeze to drop before he shot his fifth and final bullet into the target 300 yards (274.32m) down the South African firing range.

Owen lost his right eye in a car accident when he was a teenager, so he shoots left-handed and had to use his aiming eye to check the wind flags before his shot.

He re-sighted himself and shot the last of a tight group, but was stunned when the judges announced the distance between the centres of his farthest-spaced shots was just 1.191cm.

It was the final day of the World Benchrest Championships - a sport where shooters fire from a bench to try to get the closest group of shots they can - and the precision shooter who did not practise between competitions had emerged with a world record.

"It didn't really sink in at first. It looked like a tight group but you never really know until it's measured," Owen said in the staffroom of his South Dunedin automotive workshop.

"And when it came back, well, it was a real surprise."

Before the final day 300-yard shoot, Owen posted the best score of the four-man New Zealand team that finished in the top 20 at the world championships last year.

He is in the Shooters Hall of Fame, was recently named the New Zealand Deerstalkers' Association's (NZDA) Benchrest Shooter of the Year - his fourth successive title - and has enough competition points to get it again.

Owen lives in Dunedin but is a member of the NZDA's Nelson branch. It is the only South Island branch with a specialist benchrest range, but it is too far away for him to practise.

The shooter of 12 years got all the practice he needed at Nelson's annual Zupper Shoot, and the North Island, South Island, and National championships.

"I suppose you make a bit of a sacrifice to be a member of a club that's so far away, but when you're only travelling for competitions, it's not so bad. If I was travelling for practices, there might be some issues with funds and the relationship."

He achieved top four category placings in the World Championships in Austria in 2007 and won the First-time Super Shooter category in the legendary Super Shoot in the United States, in 2007.

"It's been a lot of fun so far. It's a real challenge doing something where a fraction of an inch can take you from hero to zero."