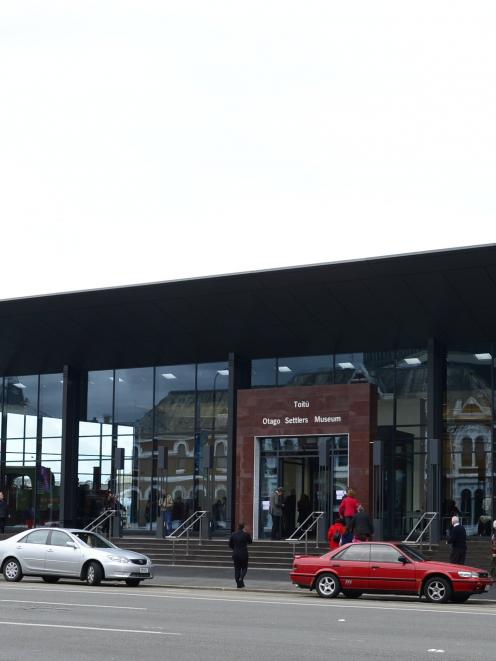 A change from capital investment on big projects, such as Toitu Otago Settlers Museum. Photo by Peter McIntosh.
Dunedin city councillors will have to choose between a 2.8% rates rise and extra spending on key priorities - including debt repayment - that will drive up the bill for ratepayers.

The choice was presented in the 2013-14 pre-draft annual plan, to be considered by councillors in public for the first time this week.

Details of key issues facing the council - including the financial future of Dunedin Venues Management Ltd and the Forsyth Barr Stadium - are yet to be revealed, and could yet alter the picture.

The budget's early draft shows council staff have gone beyond targets set by councillors, who wanted any rates increase limited to no more than 4% for the coming financial year.

That was part of self-imposed caps introduced last year that aimed to restrict rates increases to 5% in 2012-13 - a target that was later met - followed by 4% and 3% in the two subsequent years.

Councillors had also asked for additional savings for the coming financial year, 2013-14, to free up 1% of any 4% increase for spending on other priorities.

Council chief executive Paul Orders said staff had managed to do slightly better during a series of bruising budget meetings, resulting in savings totalling $5.6 million and a proposed rates rise of just 2.8%.

That represented a significant change from the 7.6% rates increase forecast for 2013-14 during last year's budget round, he said.

The cuts also created ''a level of headroom'' for councillors to make decisions about how best - or if at all - to spend the $1.4 million difference between a 2.8% and 4% rates increase, he said.

Dunedin Mayor Dave Cull said the early budget was ''a very creditable result'' but he doubted 2.8% would be the final figure.

Councillors could choose to defer any additional spending but there appeared to be a will among them to address other pressing priorities, he said.

Councillors would have to remain disciplined in their desire to spend money, he warned.

''Councillors have differing views about what they want to spend money on. The reality is, there isn't a lot of it.''

Councillors could opt to invest in a new events fund to attract more headline acts to the stadium, or further accelerate stadium debt repayments to save money in the longer term, he said.

That would see the forecast rates rise pushed back up to 4%, if all of the $1.4 million was committed, Mr Cull said.

He supported spending the extra $1.4 million and accepting a 4% rates rise but hoped councillors would not go beyond that target.

''Nothing is locked in - it's up to council - but I would hope we wouldn't go beyond that.''

Mr Orders said the cost-cutting had been achieved in part by reduced staff costs, including not filling all vacancies, absorbing inflation and strictly controlling the council's capital spending programme.

The council was also, for the first time in a decade, repaying more debt than it was accruing, as it worked to reduce core council debt to $200 million by 2021-22. The main drivers for the 2.8% rates increase were inflation, increased debt servicing costs - up $1.4 million for 2013-14 - and increased renewals funding in the water and waste services and transportation departments.

Overall operational costs had increased by just $500,000 as costs were cut in other areas, while capital spending had been cut in half, from $105 million in 2012-13 to less than $50 million in each of the next three years, Mr Orders said.

That reflected an organisation moving into ''savings mode'' after 20 years of investment in key infrastructure and capital projects, including upgrades to the city's drinking water and waste-water treatment facilities and Toitu Otago Settlers Museum, and construction of the stadium, he believed.

The challenge for councillors was to stick to the council's long-term plan by restraining capital spending and, therefore, debt for the next decade, he believed.

''That's a crucial issue in terms of managing council finances.''

Mr Cull said the council had ''turned a corner'' in debt repayment but its overall financial position remained ''tight''.

However, key reports were yet to be made public, including one discussing the financial future of DVML, the stadium and the need for a new events fund.

Others would consider options for the Waipori Fund, car park operations in Dunedin and the city's aquatic facilities, as well as the future of the council's investment property portfolio.

Mr Cull was yet to see the reports, but said councillors would have to decide whether to help DVML produce ''a balanced budget''.