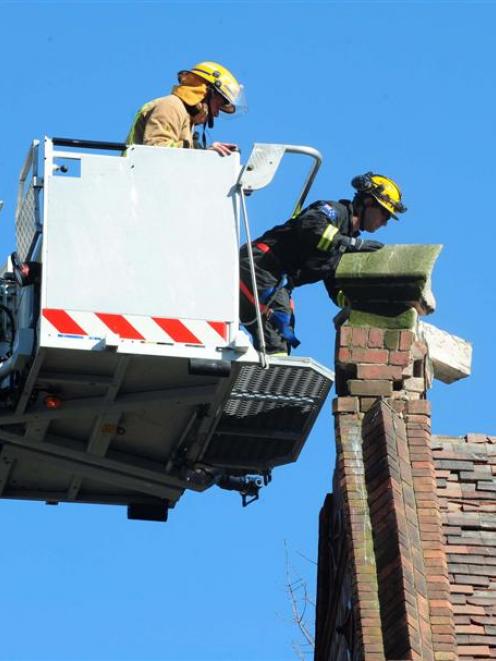 Firefighters remove loose bricks from the top of a heritage building inside the central Christchurch cordon yesterday, in preparation for the area being reopened to the public.
Relatively cheap and simple measures can protect many of Dunedin's heritage buildings from much of the kind of earthquake damage evident in Christchurch, structural engineer Lou Robinson says.

In other comment yesterday, Victoria University of Wellington geologist Prof Euan Smith said that engineers had been warning for decades about the dangers posed by unreinforced masonry structures.

After the Canterbury quake, owners of such buildings, and chimneys, everywhere in the country should be given about 10 years to demolish them or make them safe in future earthquakes, Prof Smith urged.

"We need to look after them a little bit better than we're doing.

"If we value them, we need to improve their performance in earthquakes," he said.

It was also time to consider establishing a "substantial heritage fund" to enable some Dunedin owners with limited means to better protect their heritage buildings.

A structural engineer in Dunedin for more than 40 years, as a Fellow of the New Zealand Society for Earthquake Engineering, has helped develop national standards in earthquake protection.

Much of the damage to Christchurch heritage buildings had involved brickwork which had fallen out into the street, he said.

In some cases, it was likely mortar had aged and decayed, resulting in chimneys snapping off.

Deep repointing was required to enable such chimneys to flex in earthquakes.

Tall chimneys could also be tied to roofs.

Tying roofs, walls and floors together would also strengthen heritage structures and prevent external walls from falling out, he said.