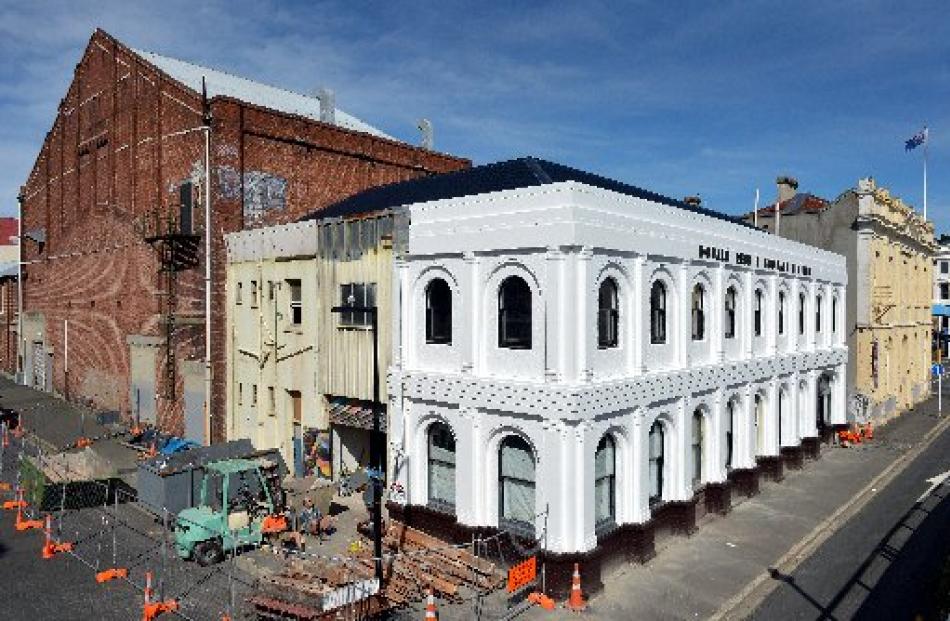 Workers enjoy a break in front of the freshly painted 131-year-old Donald Reid building, on the corner of Jetty and Vogel Sts, Dunedin. PHOTO: GERARD O'BRIEN

A rebirth is under way for one of Vogel St's most prominent buildings.

The Donald Reid building, on the corner of Jetty and Vogel Sts and formerly known as the Woodstock Building, has been wrapped in scaffolding for the last few months.

That scaffolding came down earlier this month, revealing the gleaming white facade and carefully restored exterior features of the 131-year-old building.

While the original 1884 build was led by architect Francis Petre, the building was extensively modified in the 1930s by architects Stone and Sturmer ''to reflect the changing attitudes to architectural fashion'', Dr Cawte said.

New Zealand Heritage Properties was working with architects McCoy Wixon ''to highlight this design history, while adding our own distinctive style to other parts of the building'', Dr Cawte said.

Originally built for the Otago Harbour Board on reclaimed land, the building was bought by Donald Reid & Co in 1923 and stayed in the company more than 50 years.

More recently, it was used as a furniture shop before falling into disrepair.

Three new as-yet unnamed tenants would move in to the completed building within the next year, he said.