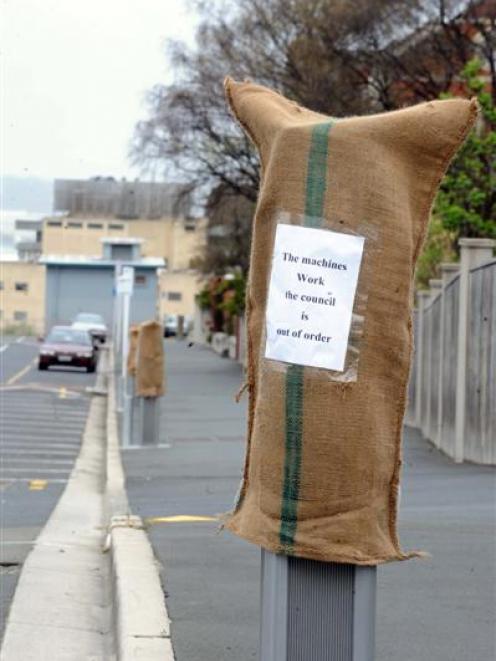 Sacks that appeared on parking meters and lights in the city yesterday, with messages critical of the city council. Photo by Stephen Jaquiery.
The clamour for immediate parking changes in Dunedin has gathered impetus, as further protest appeared yesterday on city streets.

Poll: Are you happy wiith the changes to Dunedin parking?

The head of the Dunedin City Council working party that initially developed the parking regime, Cr Michael Guest, who has previously argued against immediate change, said yesterday more changes could be made within the next two weeks.

He revealed one Dunedin shop owner had brought $20,000 in $20 bills to a meeting at which he and Mayor Peter Chin were present recently, telling them that represented one month's worth of losses since the new regime was put in place.

While most councillors have indicated they are willing to consider changes sooner than the formal review - expected to report back to the council in November - working party member deputy mayor Syd Brown said he wanted to see evidence before any change occurred.

People arriving in the city yesterday discovered an anonymous protest in which sacks were pulled over parking machines and lights across the city centre, containing messages criticising the Dunedin City Council.

One said, "The machines Work, the council is out of order"; another read, "Retain Free Access to the arts precinct" and another "Business friendly, Yeah Right".

That followed news on Friday that some councillors planned to push for urgent changes at a council meeting today that would effectively be a U-turn on the regime put in place in July.

Cr Guest said a working party to review the first three months of the policy, due to be set up at the meeting, would begin work next Monday, and the following day would discuss the issue at a meeting with all councillors.

Throughout that process, operational changes could be made.

"I'm not saying we've got it right. Clearly there are things wrong. I think there do have to be widespread changes."

But he claimed the number of major policy changes the council could make may be legally limited - without further public consultation.

He was also keen to see the "considerable amount of information" expected from a review, including data from parking machines and parking tickets, and occupancy counts and interviews.

"I think decisions should only been made in relation to those matters."

The working party that originally dealt with the parking issue was made up of Crs Guest, Andrew Noone, John Bezett and deputy mayor Syd Brown and it was suggested the review group be made up of the same.

Crs Guest and Bezett are on leave, and will not be at the meeting.

Cr Brown has injured his back, and was not sure if he would be able to attend.

Cr Brown said no modifications should go ahead until quantitative evidence from the review was in.

He said until that time, any decision would be "wet finger in the air stuff".

Cr Noone was more receptive to immediate change.

He said the "big question", though, was whether the parking changes or the recession were the cause of the problems.