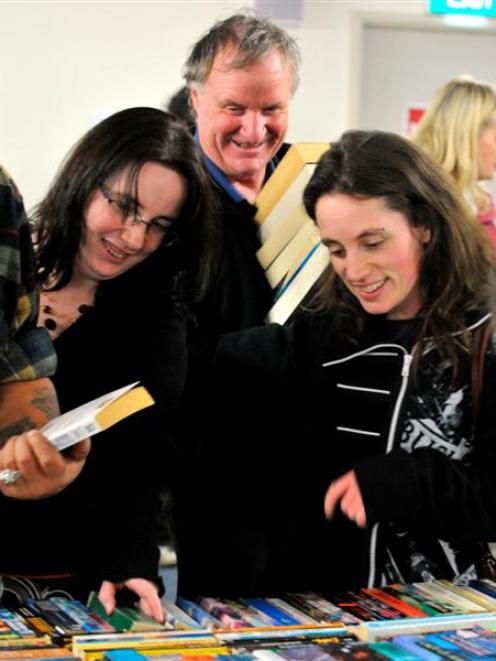 David Mutch watches as his daughters Alana (left) and Jodi search for new books to add to the growing collections in their respective Dunedin homes. Photo by Gerard O'Brien.
Waiting for the doors of The Star Regent book sale to open just before noon yesterday, David Mutch realises he has forgotten something.

He has his carry bag and his cash, but he has left his list of favourite authors and book titles to look out for at home.

He is unfazed. He and daughters Jodi (32) and Alana (30) are making the first of what will be several trips to the sale before it ends at noon today.

It is a long-standing family tradition for the Dunedin family, who all have their own homes, to use one house as a base during the sale, playing cards, swapping stories and inspecting purchases in between return visits to the theatre.

His daughters joke that it would not matter if their father never finds his list and buys no books this year.

"I bought about 30 last year and have only read six. And I've still got some unread books from the year before."

As usual, the Mutch girls have taken the day off work. Mr Mutch, a self-employed gardener, has done the same.

The sale, which has been held annually since 1980 and is the major fundraiser for the theatre, is an eagerly anticipated yearly excursion for thousands.

Jan Paterson, of Dunedin, has been bringing her daughter Lee-Ann (now Thompson) for at least 25 years.

Ms Thompson, also of Dunedin, has two girls of her own and is buying books for them, while Mrs Paterson favours murder mysteries.

Glenys Donaldson, of Palmerston, has come prepared for a long afternoon. On the hunt for craft and knitting magazines, she has brought her lunch with her.

For the third consecutive year, Howard and Jeannette Verity and daughter Viv have driven from Timaru, combining a visit to a Dunedin-based daughter with a trip to the sale, which they estimate will leave them $100 poorer and two carry-bags of reading material richer.

Another man in the queue hears that the Veritys are from Timaru and betters them.

"I'm from Taupo," he interjects.

Although coy about giving his name, the man says he is a book dealer and this is the third time he and his wife have come south.

They bring virtually empty suitcases with them, returning home with bulging luggage and excess baggage.

"It's a nice weekend away. The books are a bit of an extra."

Among the queue is a first-time attender - but he has an excuse.

Prof Andrew Strathern, an anthropologist from Pennsylvania, in the United States, is visiting the University of Otago and spotted an advertisement for the sale in the Otago Daily Times.

He hopes to find Dunedin and South Island history books, and is curious to experience the sale.

As the Municipal Chambers clock strikes noon, the doors open and the crowds make their way to hundreds of thousands of books spread over tables in the theatre and a basement room.

Volunteers Margaret Lindsay (75) and Bob Sims (76) steel themselves for what they know will be a steady onslaught of buyers at their cash register.

Both will work the entire 24 hours - "just to prove we've still got it in us", Mrs Lindsay says.