Pile-driving progresses according to plan 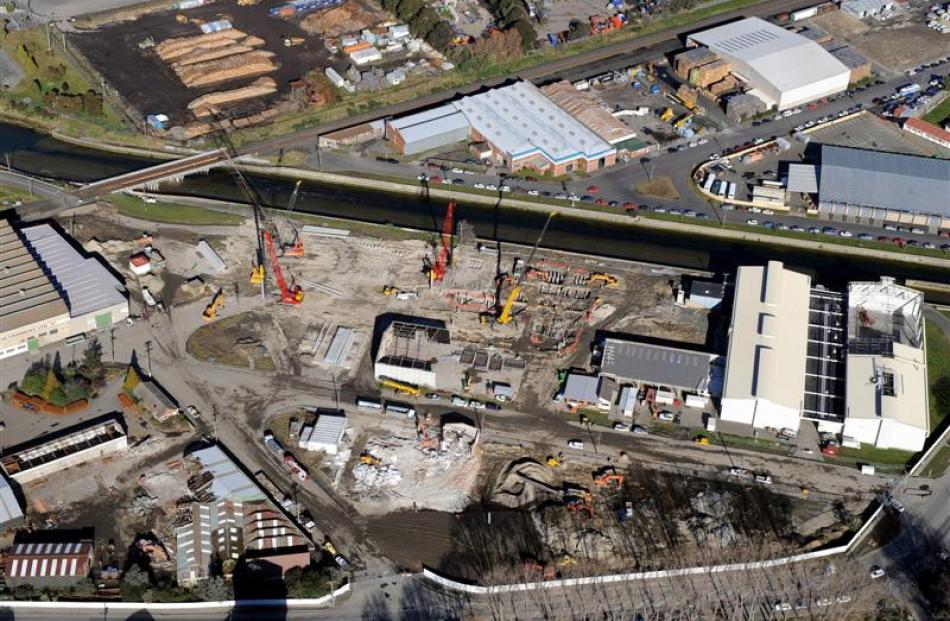 An aerial view of the construction. Photo by Stephen Jaquiery. 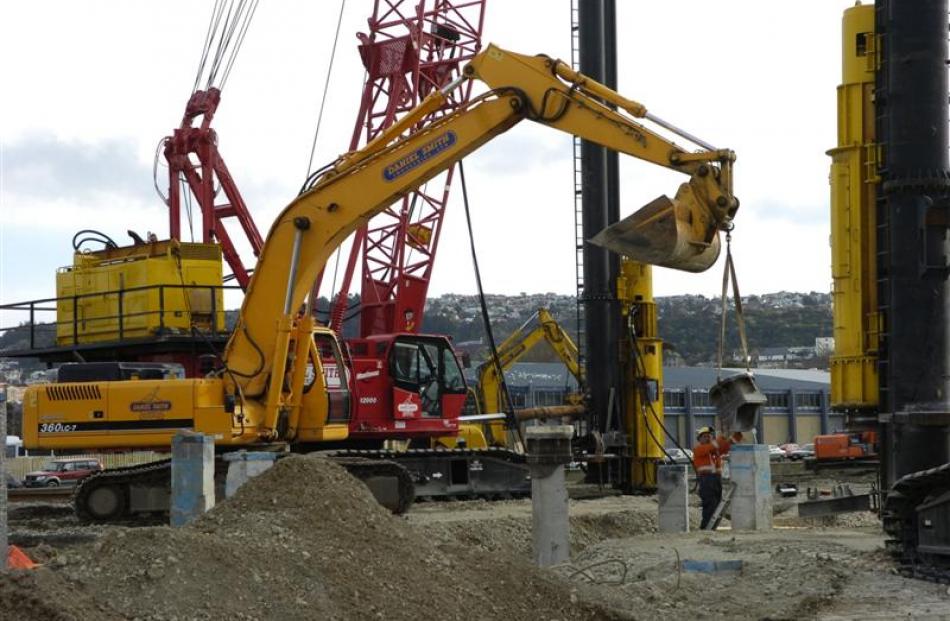 Pile-drivers at work on the south stand. Photo by Jane Dawber. 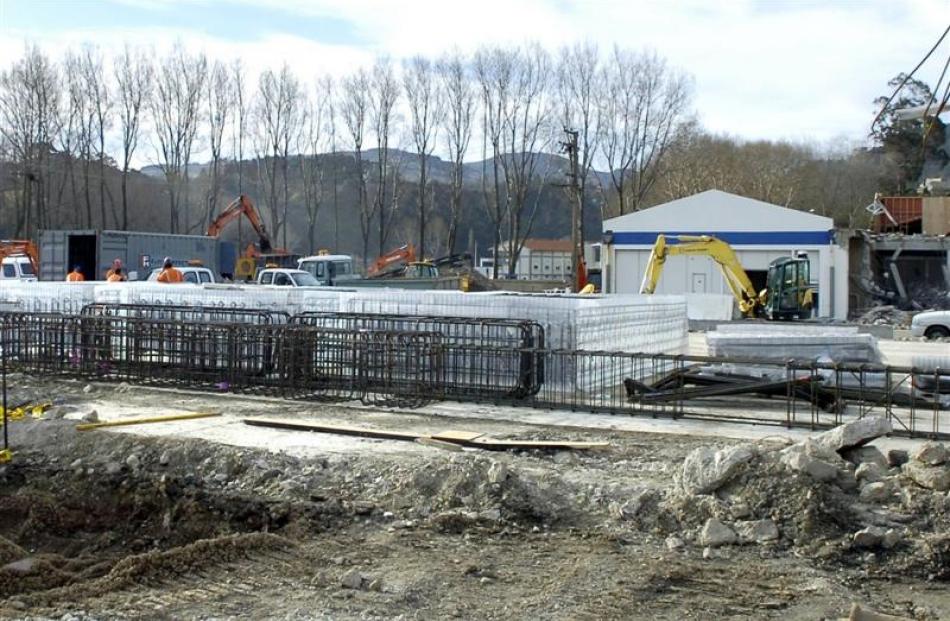 Steel reinforcing for the foundations. Photo by Jane Dawber. 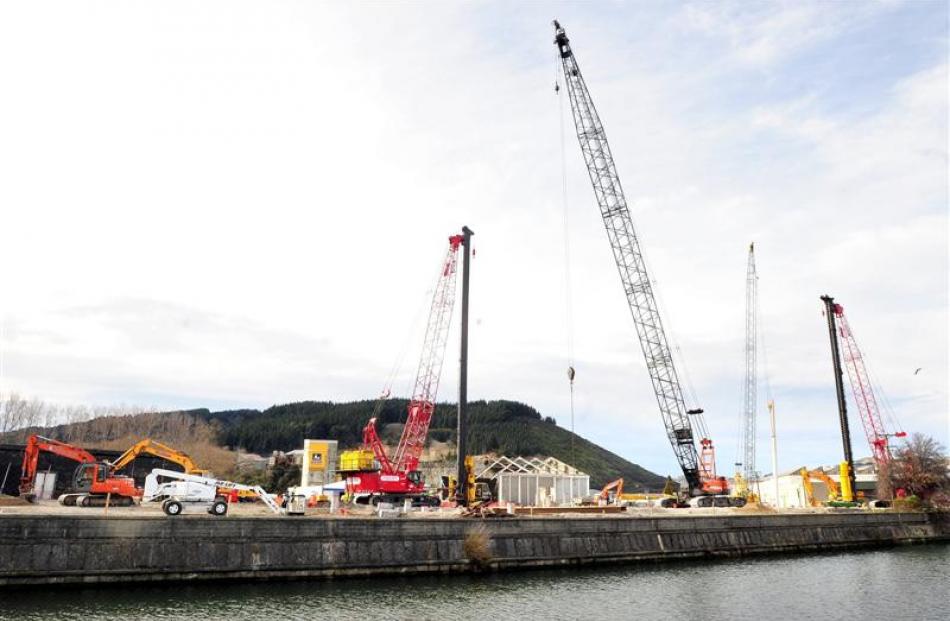 The site of the south stand beside the Water of Leith. Photo by Craig Baxter.

Work driving piles into the ground at the Forsyth Barr Stadium site is going ahead successfully, but the most difficult stage of the project, lifting about 700 tonnes of steel roof trusses into place 35m above ground, will be the major challenge of the project.

In fact, lifting such a weight so high had never been done in New Zealand before, to Mr James' knowledge.

"It's the first time we've had to lift anything this big this high," he said.

The lift could take up to seven hours, and require two 400-tonne cranes lifting at once, with pinpoint co-ordination between them, on a day with no wind.

"You have to plan the timing of it," Mr James said.

If the wind caught the trusses on the way up, the whole lot could come crashing down.

A visit to the site for an update on construction showed the work moving steadily ahead.

The piles for the south stand have been sunk in a variety of configurations, from single piles to some in groups of three or four, some sunk at angles.

The technique for hammering them into the ground was anything but subtle.

"It [the pile-driver] sits on top and we start smacking it [the pile]," said Mr James, who is from Taranaki and has worked on the Manukau wastewater plant and the America's Cup wharf, in Auckland.

Technology played a part: wires from the piles to a laptop provided information on their progress when 56 tonnes came crashing down on top.

Last week, 168 of about 340 piles for the south stand were in place, although more have been sunk since.

With 150-tonne rigs that were "quite temperamental", the number sunk per day could vary from 15 to none, Mr James said. 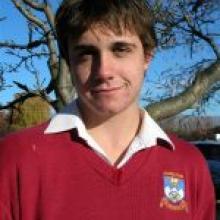 Richard Bennett
Most of the piles were going down 18m, although a "soft spot" on the quarry side of the site meant piles were closer to 28m, with one pile spliced on to the top of another when necessary.

That was expected, and the research done on the pile depths had proved correct, which was something of a relief, Carisbrook Stadium Trust development director Darren Burden said.

"We would have had cost and time problems if that had not worked; hence the reason we're quite pleased."

The next task was to cap the piles with foundation pads, some triangular and some rectangular, depending on the number of piles in a group, which then provided a base on which to build.

In the meantime, demolition by Hall Bros was still under way, and as much recycling as possible was being done.

The former Fonterra building will be taken apart, transported to Marlborough, and rebuilt there.

At another part of the site, a large machine was crushing concrete, and concrete from an old milk-treatment plant, for instance, would be used as fill on-site.

About 100 people were working on the site, on the piles and the demolition, although 250 had been "inducted", and given safety training.

Numbers would rise to about 500 in six to eight months, when work on the north, west and south stands was under way.

Once they were built, the roof would go up. The east stand would be built last.

Up to 60 people would work on steel-work for the roof, which was being made in Auckland and had to be assembled in Dunedin.

It was expected the roof would be lifted into place in January or February next year.