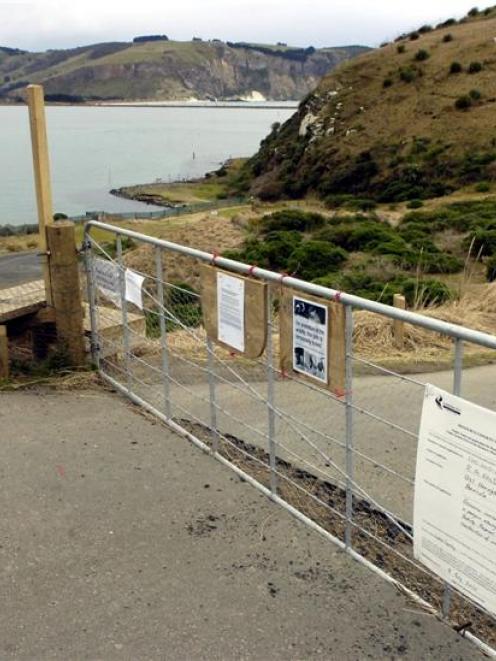 The gate blocking vehicle access to Pilots beach on Otago Peninsula. Photo by Jane Dawber.
A new penguin-viewing tourism venture at the Pilots Beach reserve on Otago Peninsula has been granted consent, and the trust behind it hopes to have the venture operating by next September.

A decision, subject to appeal, was released yesterday, granting the Pukekura Trust consent to build a viewing platform and walkways, and to operate the venture, a project the trust says is essential for the long-term safety of wildlife.

While access to the reserve will be closed at night, the trust has promised pedestrians will not be restricted during daylight hours, and new walkways and fencing will enhance the area.

Vehicle access to the reserve, a popular spot for Dunedin people and tourists to view wildlife, will be restricted at all times, however, to ensure the ongoing safety of the birds, and will be available only for emergencies and wheelchair access.

Otago Peninsula Trust general manager Robyn McDonald said yesterday she was pleased with the result, and the trust would begin raising the more than $400,000 required for the project.

In June, the Pukekura Trust, a joint venture between the Otago Peninsula Trust and the Korako Karetai Trust, applied for resource consent to develop the venture.

Under the proposal, a four-level viewing platform would be built, the reserve car park re-vegetated, and groups of up to 50 people would pay to view penguins coming ashore at dusk.

Pedestrian access during the day would be provided from a gate near the Royal Albatross Colony visitor centre, and walkways to the reserve.

Vehicle access to the reserve has been restricted for the past four months, since the council allowed the Otago Peninsula Trust to build a predator-proof fence, with a gate across the access road.

Asked about access for the elderly, or people who may struggle to negotiate the walkways down to the beach, Ms McDonald said that had not been an issue since access to the car park was closed.

The reserve is owned by the Dunedin City Council, which has already agreed to lease the area to the trust for the venture.

At a hearing last month, a committee of Allan Cubitt (chairman), David Benson-Pope and Cr Colin Weatherall heard tourism operators dropped off more than 100 people at a time at the reserve, and there had been reports of people following the penguins to their burrows, picking them up, and sticking cameras down burrows and using flashes.

That behaviour made the status quo unsustainable.

Eight public submissions were received, most opposed because of concern about the loss of public access.

In yesterday's decision, the committee said it accepted the Department of Conservation's advice the number of casual visitors meant it was better to have them "limited and managed" to protect penguins and other wildlife.

While the tourism venture was commercial, any profit would be used to enhance habitat for the wildlife.

There was an increasing number of breeding penguin pairs at the beach, and "it is reasonably clear that the prime motive of the venture is to protect the penguins from inappropriate human interaction".

Pedestrian access would not be allowed from one hour before sunset until the opening time of the colony - 8.30am in summer and 9.30am in winter, not unlike the situation at the Dunedin Botanic Garden.

The committee did note, however, that people on the beach itself, which fell outside the reserve, could not legally be asked to leave.

They would be able to leave in their own time, and would have to pass through the reserve to do so.

Any issues arising from that situation were up to the operator to manage.

Trustee Annie Villiers said the venture would allow people to visit the area with minimum impact on the flora and fauna.

"Most importantly, the penguins and their environment will have the protection they need to thrive."