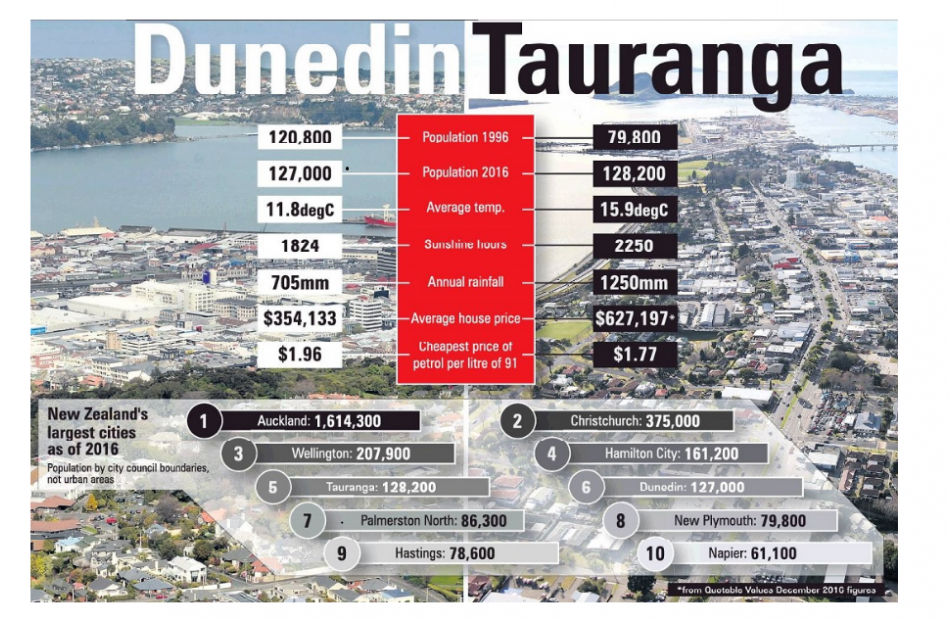 Dunedin has lost its place to Tauranga as New Zealand's fifth-largest city, but Dunedin's defenders say size isn't everything.

However, while he saw Tauranga's growth as positive overall, the city was experiencing "growing pains''. Traffic jams were becoming more common and property prices were high.

"You don't necessarily have some of the problems we now have,'' Mr Clout said.

Dunedin Mayor Dave Cull and other city leaders said Tauranga displacing Dunedin was an inevitable result of growth in and around Auckland and not something to worry about.

"I'm surprised it's taken Tauranga so long; I'd thought they'd overtaken us a little while ago,'' Mr Cull said.

He was more worried about the "quality of this city, rather than just quantity''. Dunedin was making good progress towards the council's aim of making it "one of the world's great small cities''.

When it came to population, it was not a competition.

"What we should be focusing on is our long-term vision to make Dunedin the best place we can for people to live in rather than comparing our size with other people.''

Dunedin's heritage meant it was home to a greater amount of cultural infrastructure than elsewhere.

"Sometimes we take for granted what we inherited and what we managed to build over the years.''

More important was the fact Dunedin was beginning to experience both economic and population growth after a period of stagnation, Mr McGowan said.

Population was only one form of measurement. Dunedin had significantly lower house prices and rainfall than Tauranga and was home to some "iconic landscapes''.

He also pointed to the city topping the polls in the latest Quality of Life survey.

It was also part of the "golden triangle'' of growth along with Auckland and Hamilton.

He would not be surprised if Tauranga overtook Hamilton to move into fourth place.

Dunedin's lower population growth was a "fact of life'' and he believed the "northern drift'' in New Zealand's population would continue.

Mr Clout was keen, however, to point out Dunedin had a lot to offer and he always enjoyed it here when he visited.

"I suggest Dunedin continues to build on its own strengths and enjoys the lifestyle benefits of being New Zealand's sixth-largest city.''