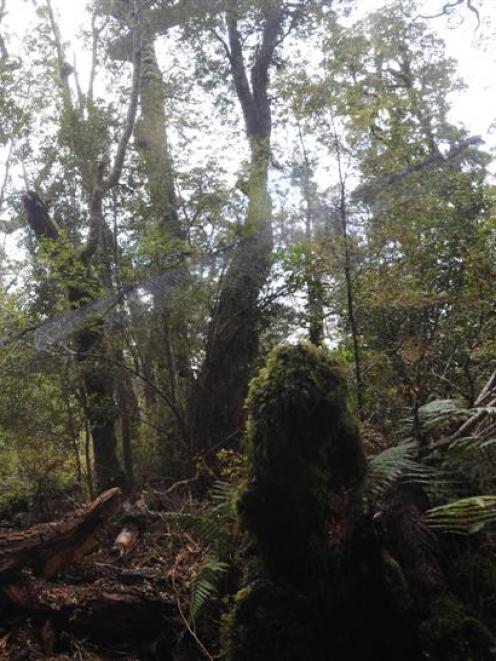 Graeme Loh sets up a net to catch mohua in the Catlins Forest on Friday. Photo by Peter McIntosh.
Twenty-three mohua (yellowhead) from the Catlins were caught and flown to Canterbury yesterday to bolster a faltering population of the endangered bird there.

The birds were captured on Saturday using mist nets and broadcast bird calls in a large operation led by the Department of Conservation at the Catlins Operation Ark site.

Doc bio-assets ranger Graeme Loh said mohua in the south branch of the Hurunui Valley had not recovered from nearly being wiped out by rats in 1999.

The population had remained at fewer than 20 birds despite being in an area under predator control to protect a population of nationally critical orange-fronted parakeet.

However, the Catlins mohua population was one of the largest at an estimated 2000 to 3000 birds and would not be affected by the loss of 23 birds, he said.

Under Operation Ark, the Catlins population had been protected through predator control such as aerial 1080 drops, including one this winter.

"Thanks to our recent rat control they'll be quickly replaced this breeding season."

A team of 25, including staff from the University of Otago's zoology department, split into six teams to capture the birds, setting up mist nets and playing recorded bird song.

It was a complicated process with experience showing they had only 15 minutes in each territory to attract and capture the birds before they realised the bird sounds were a "fraud" and lost interest, he said.

"It requires a bit of patience and skill."

Some of the birds were also fitted with radio transmitters so they could be monitored to see if they survived, if they tried to return home to the Catlins and whether they bred.

Last night they were kept in the dark in a quiet place near Dunedin airport with meal, worms and water before being flown to Christchurch today and then being flown by helicopter to the Hurunui Operation Ark site and released.

"They're robust birds. It's unusual for them to die in transfer."

If successful, the relocation would add a "new trick" to Doc's tools for rebuilding populations decimated by predators, Mr Loh said.